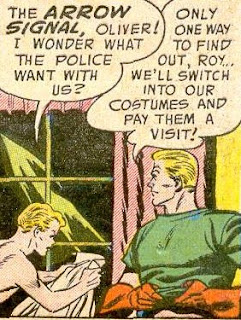 You know, it just doesn't matter which Golden Age Green Arrow story I read, it always looks like they're getting summoned right after they've been giving each other a bath or something. I mean, when the Bat Signal appeared, Bruce and Dick were generally in a smoking jacket and sweater, respectively, so you got the impression they were just lounging around Stately Wayne Manor. Not so with Oliver and Roy. They're always caught with their shirts off. What's that all about?
________________________________ 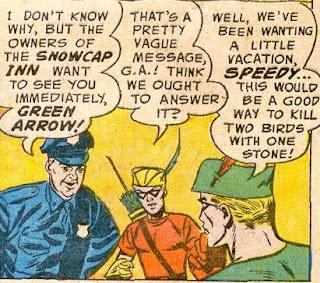 This is why I don't have the patience to be a super-hero. I'd be happy to break up an assault or a bank robbery, but I don't know that I would cotton so much to being summoned by someone, especially if they aren't paying my mileage expenses. You want to see me right away? We can start with the word "please" and promises of discussing it over a nice meal.
_________________________________ 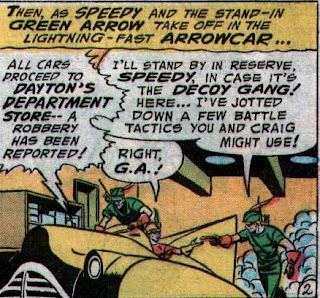 Um, shouldn't Oliver have trained Speedy a little in those battle tactics before sending him out to face armed, desperate men? Speedy is what, fourteen years old? I think it's iffy to take a teenager into any type of situation where they might get shot at, but this is ridiculous. You know, Oliver, you aren't giving the kid your last-minute play for the perfect Hail Mary pass in that high school football game against your crosstown rivals. No wonder the kid was mainlining horse all through the 1960's....
Posted by Adam Barnett at 1:23 PM

(Yes, it's an obscure sports reference. Sorry 'bout that.)

Ummm...that isn't a fourteen year old sidekick actually driving that car, is it?

All things considered, it is amazing that poor Roy isn't MORE screwed up!

ack! a sports reference on MY blog? they are all obscure to me.