I normally don't do comparisons, because they aren't fair. I mean, we all have our assets and our liabilities, and there's really no one we have to be better than other than the person we were yesterday, right? 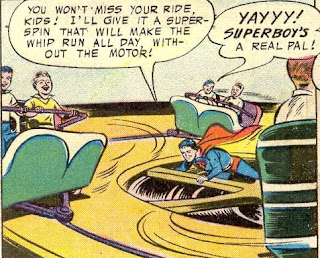 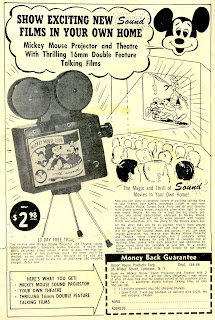 Hey, kids! Talkies! As lame as this sounds, it actually was more fun to watch cartoons shown on a projector than on television. Whenever my grade school had a carnival, they'd drape a curtain over a classroom and show a roadrunner cartoon and call it a movie theater. It probably would have tanked except they gave away popcorn from a real popper. I'd go there at least twice and buy an assload of comics from the "General Store" for 10 cents each. Screw the Cake Walk! Adam wanted his popcorn and comics!
Posted by Adam Barnett at 2:56 PM

Okay, I had no idea what a cake walk was so I looked it up here. Who the hell would participate in this inane activity unless they had some kind of odd cake addiction or an incredible desire to waste time? I like cake as much as the next guy, but a cake walk doesn't sound like much fun.

Cake and Coke (Coca-Cola, not cocaine) Walks are big money-makers at school carnies. The parents donate the cakes, so it's pure profit. Who does this? I dunno... that took away from comic-finding time.

A Coke Walk with cocaine? Probably an even bigger money-maker, but the local schools haven't crossed that line. Yet. They probably oughta - maybe our public school teachers would quit marching on the State Capitol every year complaining about the salaries (although they make double what a social worker makes, and for 9 months work).

So what happens on that ride, when the kids start to get woozy and queasy? I'll bet Superboy has already ridden off into the sunset.

I...I remember cake walks. And throwing a ping pong ball into a tiny bowl and winning a half-dead goldfish. Aquaman would probably not like school carnivals.

C'mon Sally, Superboy doesn't give permanent vertigo to just anybody! Only to those who truly deserve it.

Once again a Disney-licensed ad with horrifically off-model characters. Is that Mickey's badly misplaced ear in the projected image, or a giant goiter? And is he walking with Goofy, or some sort of vampire walrus?

When it comes to school fundraising ideas, nothing beats a pizza fundraiser. Cake Walks? They can be messy. You also have to worry about getting a lot of parents to donate (usually bad-tasting) cakes.