Shakin' things up here with the Black Terror. The Black Terror holds the distinction of having a sidekick with an even less heroic name than that of Captain America's "Bucky." Yes, folks, here to kick fascist butt and take names is the dreaded, awe-inspiring "Tim." 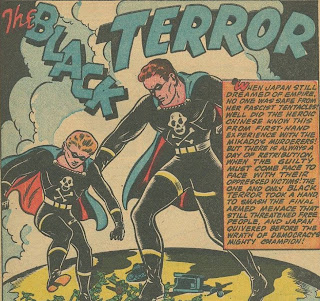 Yes, that was the name of the child with the skull and crossbones on his chest stomping on what looks to be his collection of plastic army men. In costume or out, he was just "Tim." Secret identity problems aside, why would you pal around with a kid who has such a nonthreatening name if you're calling yourself The Black Terror? It's like me calling myself The Disemboweller and hanging out with my sidekick, Clovis. 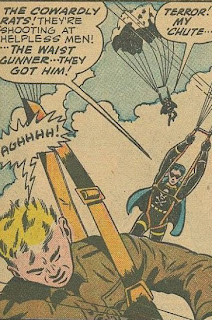 The Black Terror either had an exaggerated sense of fair play, or a tremendous double standard. You mean to tell me that if you saw enemy soldiers parachuting on top of you, you wouldn't take a shot at them? I'm pretty sure that considered acceptable by all four branches of the United States Armed Forces. 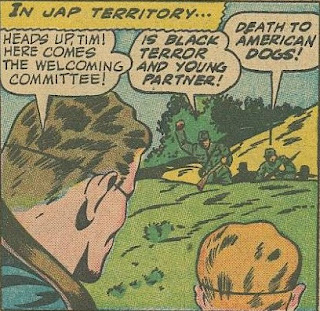 Is Black Terror and Young Partner! Even the Japanese soldiers, who were considerate enough to shout to each other in broken English, had a hard time with Tim's name. I can understand that. It's one thing to say the Black Terror beat you up, it's another thing entirely to say that your combat training wasn't enough to take down "Tim."
Posted by Adam Barnett at 2:57 PM

I think the Japanese were just embarrassed to shout out his name. One of the translations of Timothy (chi-mo-shi) is 恥毛子 which means child's pubic hair!

No way! If that's true, it's awesome! If you made it up, that's still pretty cool.

I had to do some fancy footwork with the kanji, but they do in fact translate that way, just not in usual use.

Ohmygod...it's...it's TIM! On the other hand,I do think that Clovis is a awesome name.

I love the little strings that hold on their masks!

Actually, it's against the Laws of War to shoot parachutists while they are still parachuting to the ground.

I just read in Wizard #193 that Alex Ross is reviving the Black Terror and a bunch of other old comic book heroes who have fallen into the public domain. I wonder if he'll do Tim, too!