In Which We Review the New Superman (circa 1971)

And we're back!  Let's celebrate the return with a look at the... well, it's not a reboot, but it's certainly a change in direction, so... I don't know, it was just a new era for Superman, starting off with yet another iconic Neal Adams cover. 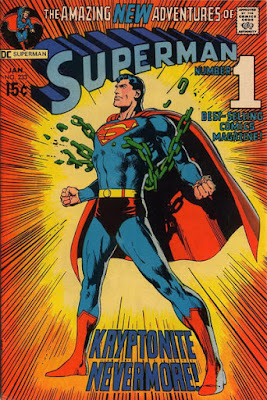 And, it turns out, the cover was accurate because Superman, through a situation I don't completely understand, indeed became immune to Kryptonite:

Yup!  That was the first appearance of Morgan Edge, who has been part of the Superman universe for over 40 years, but non-fans generally have no idea who he is.

And that was a valid point he raised, but as a comic reader, I wonder why they were ditching Kryptonite.  I mean, the whole reason Kryptonite was created was to give Superman a weakness.  I'd hate to have to try and write a character who was effectively invincible.  You can only do magic and imaginary stories so many times.

This was also the transition of Clark's day job: 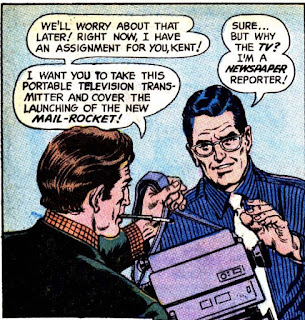 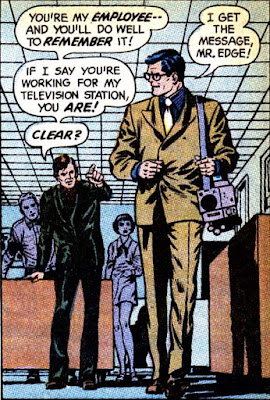 It's funny when you see comics making major changes to adapt to the times.  TV reporting had clearly been around for decades, but I guess it was finally time for comics to start catching up.  Isn't the Daily Bugle a website these days, or did I get that wrong?

Anyway, while it still enables Clark to be on the spot for big emergencies, it created a logistical problem: Clark could always duck out, become Superman, and then just write a story later.  But when he has to actually be present in front of a camera to report the news, he has to adapt thusly: 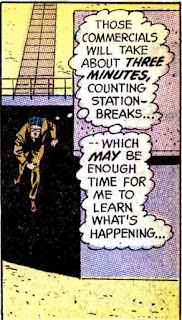 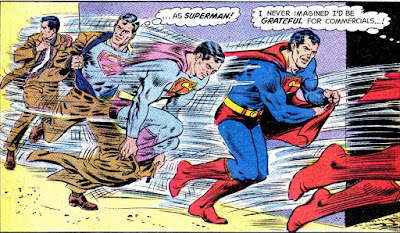 Anyway, no more problems with Kryptonite, which leads me to yet another oft-reproduced scene: 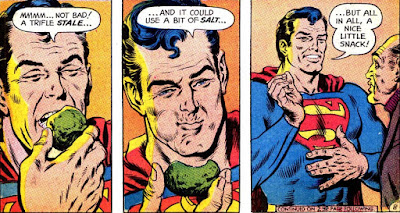 Superman is now also much more inclined to smack a bad guy: 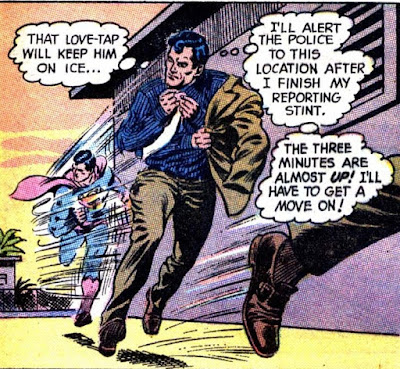 This whole "time limit" thing might get stale or ignored in the future, but it's nice to see something different.

Here's another thing that was different: Without Kryptonite, Superman gets kind of an attitude: 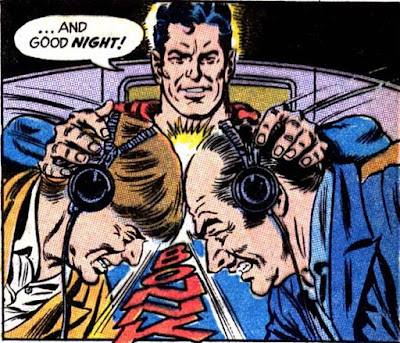 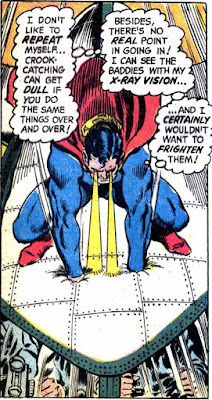 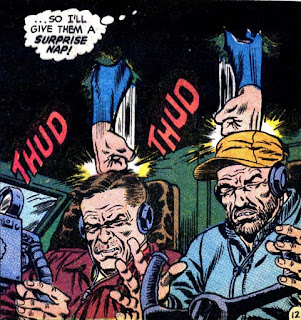 You see what I mean?  He used to address man-made and natural disasters.  Now, he's just smacking regular guys unconscious and being rather cavalier about it.  I'm not sure I'm loving that.

Anyway, the change in job assignment is made permanent: 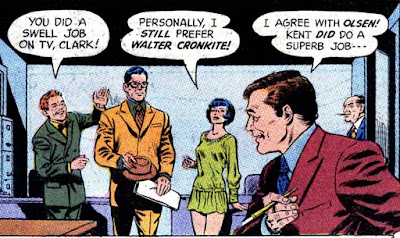 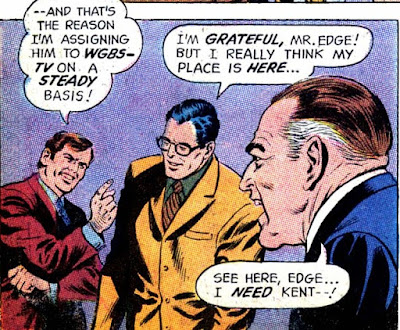 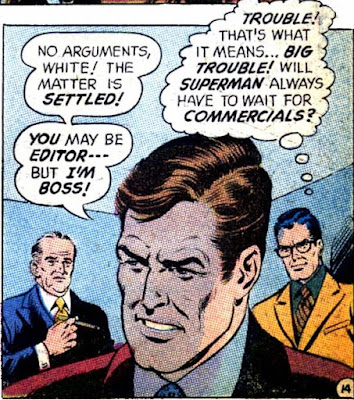 And that's when things took a new direction in Superman.  Of course, my worry is that we'll see an upswing in the quality of storytelling, which means I'll have a harder time finding blog material.  But hey, let's give it go!

Don't worry, it only lasted about a year. Seriously, this was the start of an attempt at a Marvel-ized Superman (though I'm sure DC wouldn't have admitted it) and when it didn't sell too well it was dropped - though I don't think they ever did a full-blown return to Mort Weisinger style.

On the other hand, you could check out the last few issues of JIMMY OLSEN after Jack Kirby's run. Some of those comics are even SILLIER than the old stuff.

If I'm not mistaken, it wasn't so much that Superman lost his vulnerability to kryptonite as all the kryptonite on Earth was turned into iron or somesuch. (Why it was still green, I don't know, but it also doesn't appear to be glowing like kryptonite is usually drawn.) I believe they also tried to tone down Superman's powers to compensate for his lack of a weakness.

But, like all attempts to lessen Superman's power levels, it didn't stick, and he was soon back to his god-like levels. I'm sure, though, that the current New52 attempt will be permanent. (It won't.)

This is the run with the Sand Superman I meant to send you scans of a few months back, Adam. You'll have to at least post the "origin" of that guy. This is the new weakness for Superman after all kryptonite on Earth--as Green Luthor says--was turned to iron because science. Later issues of the run included I Ching from the revamped WW book. All three characters were changed right around 1970, first WW became Diana Prince in the white jumpsuit, and after Superman it was the Denny O'Neil Batman era, where he's the first to turn Joker into a homicidal maniac.

The current DC has done the same thing after that silly Convergence hoo-har this past spring. Superman is depowered and angry, Bruce Wayne has amnesia and so James Gordon wears a robot bunny Bat-Suit, and WW...just gets a new costume.

I remember that in the 70s, they toned down Superman's invulnerability a good deal. He was now being hurt by a lot of things: lasers, electricity, sonics, and punches from other super-beings.

Adam,
You must admit that Superman was still something of a dick in the 1960s. He just wasn't an especially violent dick-- possibly because Weisinger was less interested in superhero-action than in creating weird puzzles and comical situations.