I'm in the second issue of Superman, and it's going to be hard to tell exactly when we have the "first time" landmarks like heat vision, super breath, etc. because Action Comics was being published simultaneously and I'm not interested enough in Superham history to figure out which came first.

That being said, he's not flying yet.

This creates a couple of interesting situations. 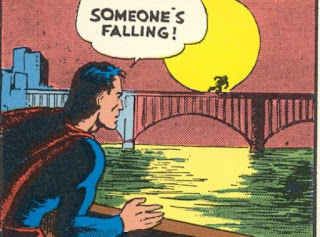 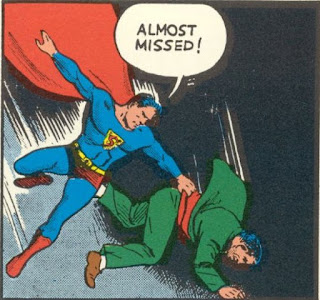 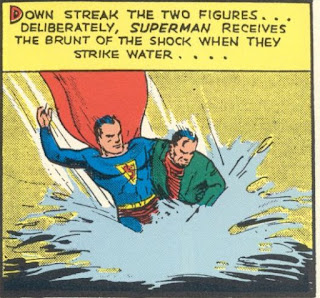 See?  Even if he gets you, he can only resist gravity for so long, so you're gonna hit the ground.  I appreciate that he "took the brunt of the shock" there, but it still looks like that was an awful landing for that guy. 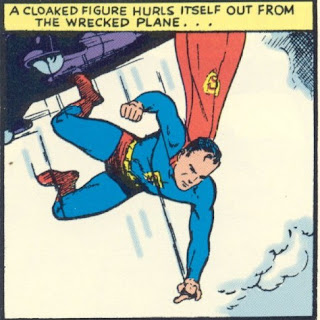 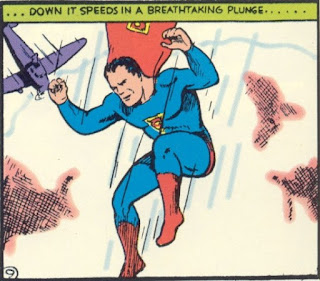 That dropping pose looks okay.  I can live with that. 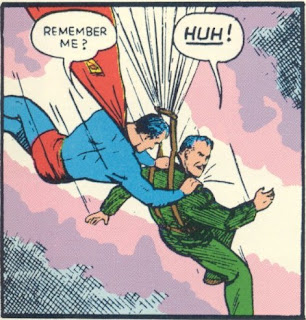 Hmmmm... not exactly the most majestic nabbing of a bad guy you'll ever see, but okay.  I guess. 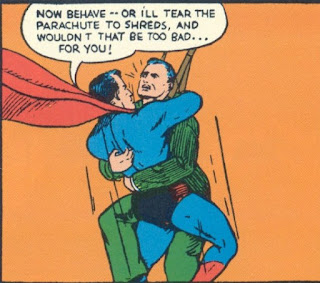 In the previous panel, Superham was behind the guy.  That means the above panel was after Superham crawled around the guy to hold him that way.  Can you imagine how silly that looked?  And the poor guy is so freaked out he's actually holding Superham because... well, what else do you do?

Anyway, there's a dignity problem there for the Man of Steel, so I would imagine we'll be seeing flying soon.

But what I really want to show you is this: 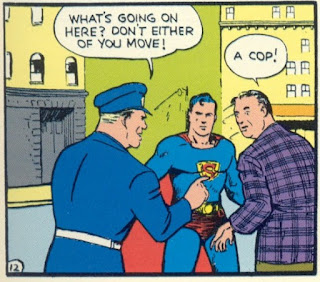 Okay, Supes and this guy were having a verbal argument.  Supes got a little physical with him, but nothing awful.  Although, if push came to shove, Supes was clearly the aggressor and the guy in the jaunty purple plaid blazer was the victim.  The cop is clearly just investigating a minor skirmish.

And then proceeds to gun this guy down: 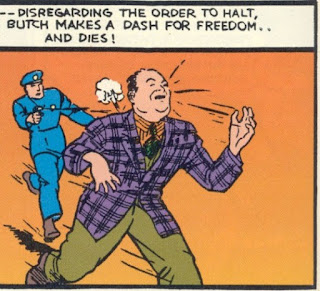 I'm not trying to "lawyerball" this blog, but exactly what justified the use of deadly force there?  Not a thing.  I'm just saying, you need to behave yourself in Metropolis, because they're not clowning around.

All I know is that the poor guy in the first panels must have gotten a super wedgie.