Batman and (Not) Evel Knievel Crossover

I've said it before, Dear Ones, and you never complain.  But just a reminder that my responsibilities in the old day job have increased, so I might not have enough hours in the day to post each and every day.  But rest assured, the blog continues unless and until I put a post on saying we're done.

With that out of the way, check it out: 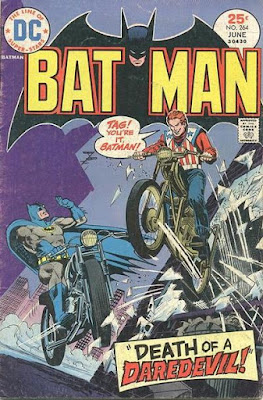 I should mention that, at the time, Evel Knievel was at the height of popularity and most folks (like me) who can actually remember the 1970's will tell you that he was pretty much a pop culture icon, right up there with Farrah Fawcett and the Fonz.

Yeah, it was kind of a weird time.

Anyway, during the 1970's, if you saw this comic, you thought it was some sort of Batman/Evel Knievel crossover.  I mean, Daredevil had a crossover with Uri Geller, so why not?

I guess there was a "why not," because that guy on the cover isn't him.  They made that perfectly clear in the first panel: 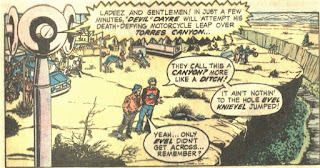 Ah, the Snake River Canyon jump.  No, Evel didn't make that one.  And he was lucky he didn't drown.  Anyway, DC Comics Legal Department wants you to know that this character is not Evel Knievel, so they didn't owe him anything for using his likeness.  They just wanted that made clear.

Also, this is the issue where I learned what that thing was called that burglars in comics and cartoons carried around to smack you in the head:

It's called a "blackjack."  See?  Who says you can't learn stuff from comics?

This exchange between Bats and Commissioner Gordon in the next issue tickled me: 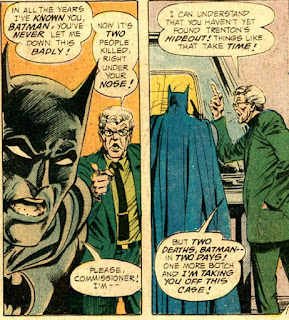 I know Bats is an honorary member of Gotham P.D., but I was always under the impression that was to give him the authority of a law-enforcement agent.  It never occurred to me that he was directly accountable to Commissioner Gordon like that.... and I'm still not sure he was.  Best be careful where you're waggling that finger, Jim!

I remember Evel Kneival (and his son) well. In a perfect world, one of the Wallendas should have walked over Snake River Canyon with Evel roaring by and scooping him up in his arms.

Never did see ANYthing on The Human Fly, even though Marvel insists he was a real daredevil.

Ask and ye shall receive, Wayne!