Close Encounters of the Cupcake Kind!

Hey, gang!  I got word that the awesome Comic Book Men is casting for season five, so if you've got something awesome... well, first, consider sending it to me first so I can pull any humor out of it for the rest of us and then.... go to this link if you want to audition.  If you get on the show, make sure you begin every sentence with, "Well, as I read on Comics Make No Sense..."

Meanwhile, contributor Robert Gillis is taking over the content for today, and some greatness he does have!  First, the appearance of a brand new meme we're going to call:

Thanks for Clearing That Up. (tm!) 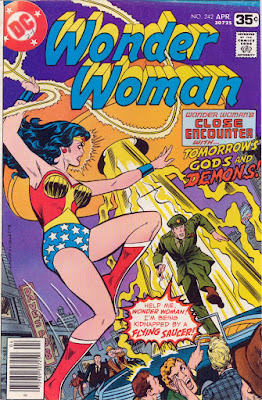 I've been really slow in bringing about the first volume of Wonder Woman, mostly because that title has been mined pretty thoroughly by other sites.  But this is indeed worth noting because it is one of the most egregious examples of terrible cover dialogue ever.

First, the caption box is a flimsy and feeble attempt to cash in on the movie, Close Encounters of the Third Kind, which was popular for some reason.  I was a child when the film came out and was expecting something a bit more Star Wars-y.  I can't imagine why they thought your average comic book reader back in the day would consider any comparison to that movie as something that would move copies of Wonder Woman off the racks.

And, as Robert pointed out, could Steve Trevor be more expository?  Yeah, we see that you're being kidnapped by a flying saucer.  Frankly, if Wonder Woman couldn't figure that out, she probably isn't going to be much help, anyway.

Thanks for Clearing That Up! (tm!)

Moving on to the Hostess ad! 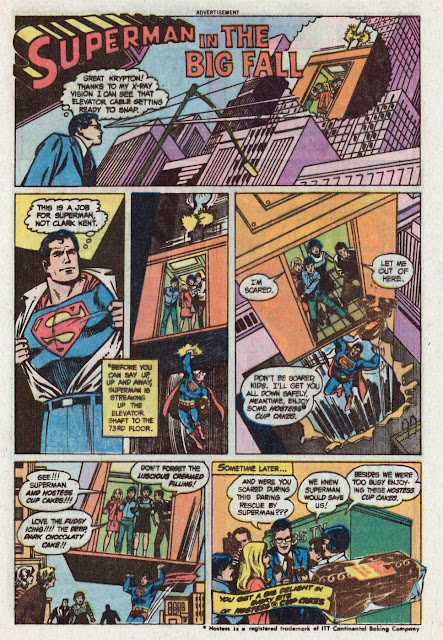 So, the elevator cable breaks and, rather than deposit the elevator safely at the bottom of the shaft (heh... "shaft"), he decides to shove the thing right through the roof.  I'm sure the building's owner and his insurance company are happy that they don't have a quadruple death situation on their hands, but their gratitude has to be somewhat tempered by the large elevator-shaped hold in the roof.

But it was darn sporting of Superman to provide snacks during a rescue.  You don't see comic book heroes doing that sort of thing these days.

In an elevator that could cause you to plummet to your death? "I'm scared." Just got Hostess Cup Cakes? "Love the FUDGY ICING!!!!" Interesting what does (and doesn't) get a reaction from people in Metropolis...