Stop Crying! It Spoils Your Complexion!

Dear Ones, I'm afraid there will be one more teensy break next week.  I've got two days of vacay left at work to use by the end of the month or I'll lose 'em, so I'm going to take a staycation and extend the holiday weekend.  So, we'll be back on Thursday, May 28th.  'Salright?

I love Boy Meets Girl Comics.  So rich in love, passion, and things I can make snarky comments about.  Here's more from issue #11! 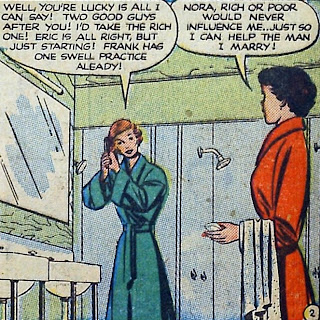 Rich or poor would never influence my decision as to who I marry...

A woman just said she didn't care which guy had money?  I thought these were based on true stories!  Shenanigans!

And now for a CMNS Moment.... of Comic Book Greatness! (tm!) 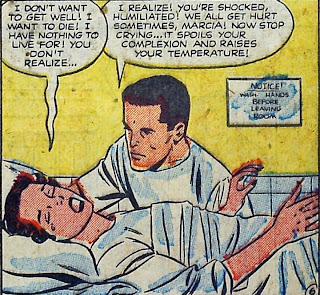 This has been a CMNS Moment.... of Comic Book Greatness! (tm!)

Check this guy out: 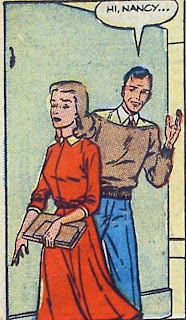 Bob was surprised that Nancy was able to resist his jaunty, "sweater pulled down over the shoulders" look.

Seriously, was that ever a thing?

And let's have one last CMNS Moment.... of Comic Book Greatness! (tm!) 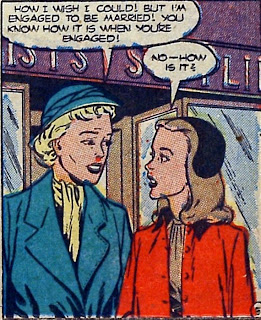 This has been a CMNS Moment.... of Comic Book Greatness! (tm!)

See you next Thursday!

These ARE a hoot! Sweater Man is looking at her behind, and the Doctor is worried about her complexion being blotchy. Don't want an ugly corpse, now, do we?


And how IS it when you're engaged anyway?