In Which Batman Throws a Bat-Hissy

Batman #237 was fairly iconic for a couple of reasons.  First, there was this classic cover: 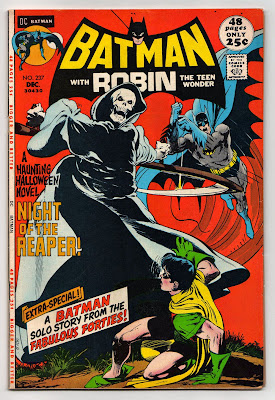 And.... yeah, it's pretty awesome.  But check it out inside the comic: 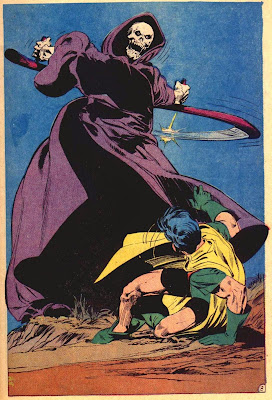 See?  The cover has roughly seven other items on it besides the artwork.  I understand the need for the title, the issue number and the price, but just look at how much more amazing that artwork is without all the jibber-jabber.  Comic book covers should have as little jibber-jabber as possible. And you may quote me on that.

This ish is also popular among comic nerds because it featured an appearance of the Rutland Halloween Parade:

Where you'll see things like the X-Men's Havok and Captain America hanging out with Hawkman!

For thems what don't know, the Rutland Halloween Parade began back in 1960.  It had a heavy superhero theme and one of the early organizers, Tom Fagan, became friends with many comic creators and had a bunch of 'em stay at his house after he talked them into appearing in the parade in costume.  Other publishers besides DC would have issues spotlighting the parade and Fagan himself over the years, which made Tom Fagan pretty dang awesome.

Here we see "Thor" paying the DC Universe a visit, chatting it up with Denny O'Neil: 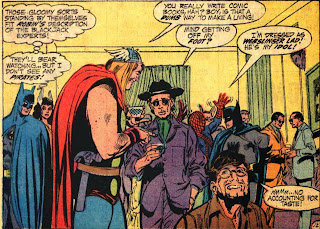 But then, Batman throws a hissy-fit and kind of ruins everything: 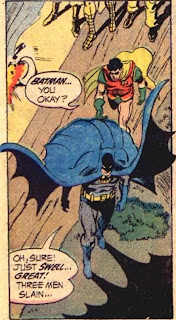 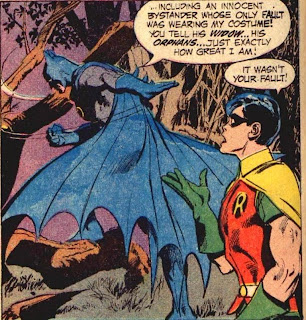 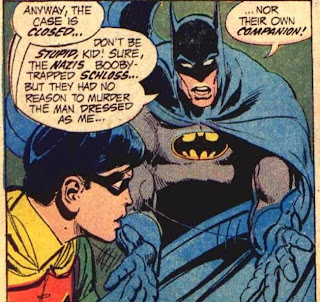 I'm not discounting the notion that Bats should be upset, but how do we feel about Bats losing his cool at all?  Denny O'Neil did some fine work, but Batman really took a testosterone loss when he fell in love with Talia.

And now for an installment of So ... THAT Happened! 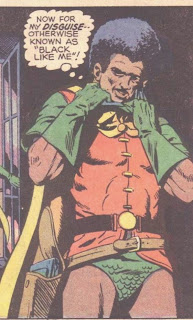 I mean , you can't fault Robin for using a disguise that works... but why did he bother tinting his legs all the way up to the old crotchal region?  And did he also tint the crotchal region?  Not to be all focused on Robin's crotchal region, but.... you know, some things lead to perfectly legitimate questions.  I guess when you are trained by Batman, you learn to just be through for the sake of being thorough.

That issue I was griping about yesterday?  Apparently it wasn't just me: 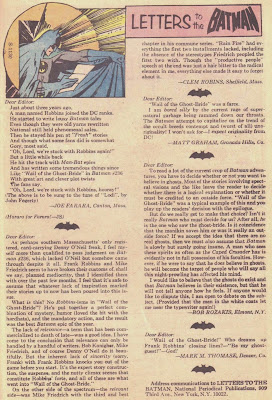 Wow!  Even a letter from Bob Rozakis!  Awesome!

So is there a difference between being a bigot and being a "huge mite" racist? Anyway, a thing can't be small and big, come on Denny!

O'Neil's stuff in the 70s was only good in comparison to other comics, but perhaps comics written for children can't be that good. Much of his stuff in the 80s was good in its own right.

Yeah, if you look at it in the time frame, it was certainly more ambitious than other stuff. But it didn't age so well and comes across these days with all the cred of an ABC Afterschool Special. But I do tend to cut the stories some slack because it *was* pretty groundbreaking material for the day.

And I read it as Robin being somewhat sarcastic in his thinking. "I'm not saying they're bigots, but..." It's always risky using sarcasm because we have yet to invent a sarcasm font.

When I was a teenager in my 70s, bigots and racists were two different things, at least defined by the adults on my block. A bigot hated people based on their mindset. The Irish cop--plenty here in Chicago--was an alcoholic mic. The tailor was a kike who didn't need money. Racists were different where I grew up, on the Southwest Side, where the Neo-Nazi Party fronted Marquette Park and crazy demonstrations were held every weekend and even lampooned in THE BLUES BROTHERS.

I think Denny was using sarcasm, too. But that's my two cents on the two words. I can't say when I last heard someone called a bigot.

Back to Tom Fagan and Rutland.I want to say it was the issue of the JLA with Phantom Stranger standing on a rock (maybe #100?) and an Avengers comic AND this issue of Batman that all involved the same visit by the Marvel & DC writers and artists. Len & Glynis Wein, Denny O'Neil, I think Berni Wrightson. Whoever was described as being acting funny in Batman, I think (I just don't recall after all theses years)that person started acting funny in the pages of the Avengers comic.

I remember those comics because A/Halloween parade?! Hell, yea. 2/the way the characters moved from book to book. An over-looked Rutland comic was an issue of AMAZING ADVENTURES with The Beast.

You're right, Wayne! And this page lists all the known comics where the Rutland parade appeared!