Nicky Started Rushing Me... And I Liked It!

Because we can't do Batman every day.

Here's something I didn't notice back when we covered Boy Meets Girl #10: 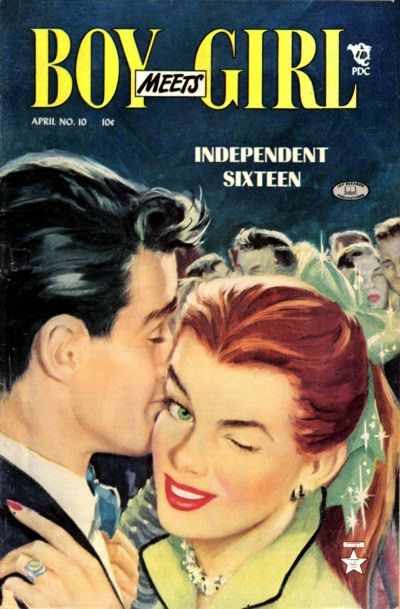 Hmmmmm.... "Independent Sixteen" may cost you your independence for 16 years, depending on the consent laws in your State.  I don't care how much winkin' she's doin', fellas... it ain't worth prison.

On to the next issue! 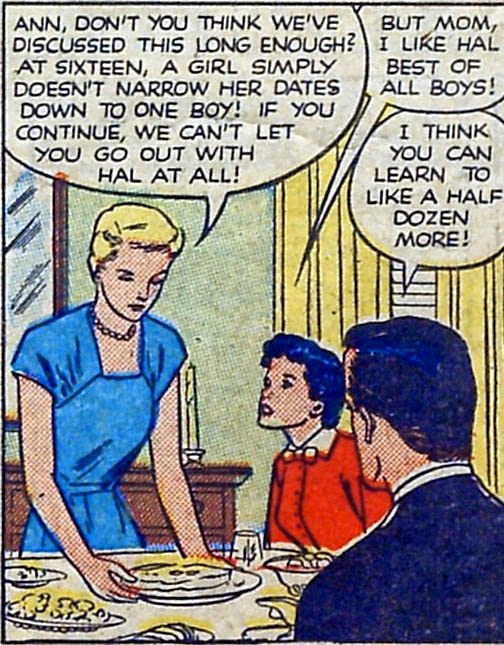 So... Ann's parents are telling her to date around?  What are they, her pimps?  You're in a healthy, committed relationship with a fine young man, Ann.  And we expect you to put a stop to it or we will! 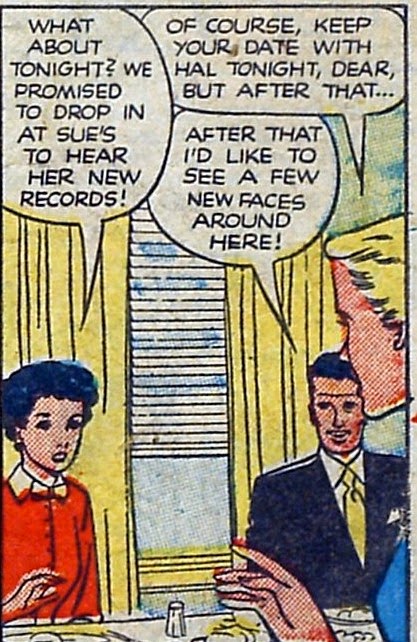 Man... they're pretty hardcore.  Unless Ann and Hal are talking about marriage or something, they should probably count their blessings that their daughter isn't dating around.  What awful parenting. 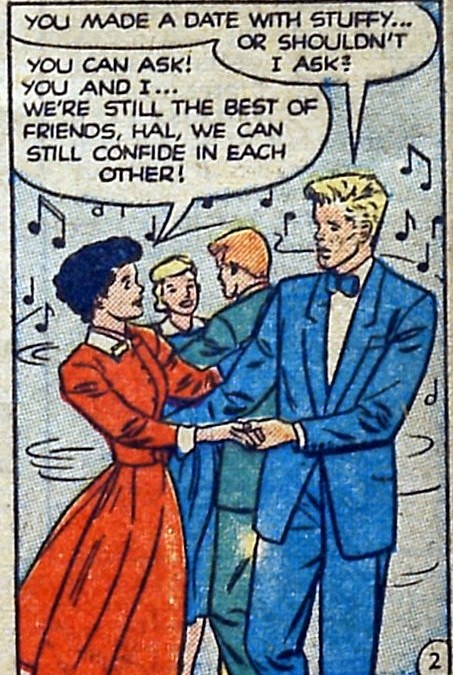 See?  Now she has a date with a boy named, "Stuffy."  This is what happens when you don't leave well enough alone.  Learn from this, parents!

Also, Hal has been totally friend-zoned: 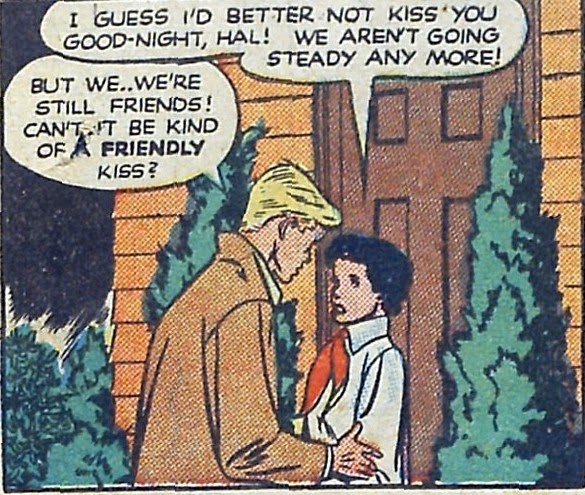 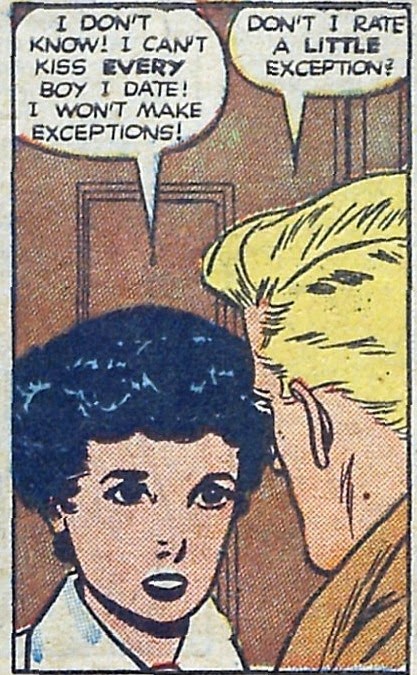 Oh, man... DENIED!  And call me a pig, but it seems like Hal should be rather insulted that he's been placed in the same league as every boy she dates.  Will you be needing that knife back, Ann?

Enough of her.  On to some girl in nursing school whose name I forget: 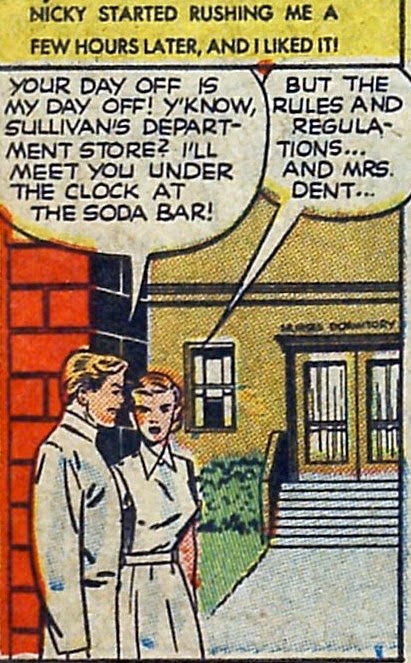 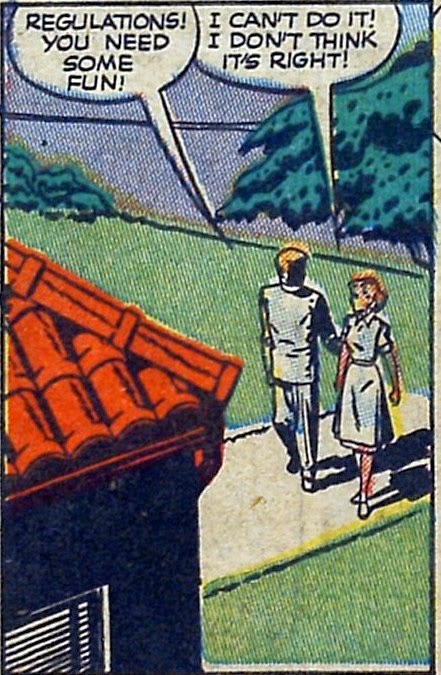 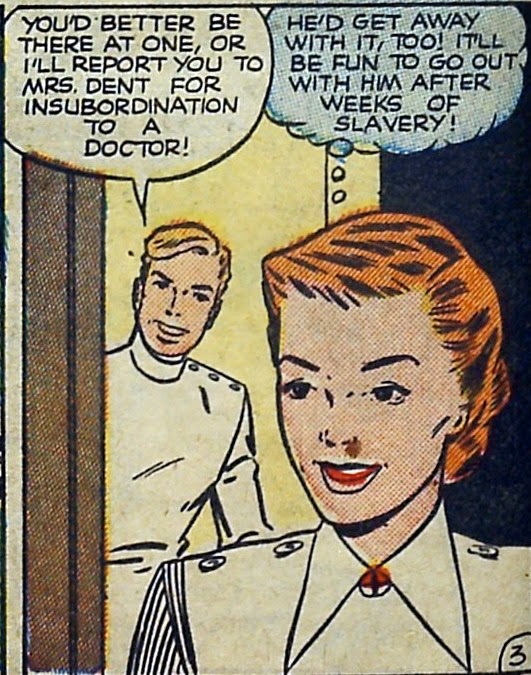 Well... I guess it ain't sexual harassment if she likes it, but don't do what Nicky did, fellas.  There's nonsense you can only get away with if you're rich.  If that guy from 50 Shades of Gray wasn't a billionaire, he'd have been on a sex offender registry somewhere.  That's the power of cash.

I know I'd get sued, but I wanted to write 50 SHADES OF GRAPES OF WRATH, with the grandfather into all the fetishes. He learned something new in every state they passed through.

I even thought of DJANGO UNZIPPED. My writing career is over, I tell you.

Regarding the comic, and I am not making this up, at the time that comic came out you could marry a girl at 16 who was your cousin! Therefore, two generations later, the family tree I have looks insane. My auntie married a second time in 1991 (previous husband died here in Chicago in 1966) and the new guy was related to my grandmother's sister's something or other which meant my auntie married her step-brother. Thanks for letting me get that out of my system.

Geez, she should have just MARRIED the guy. And I think you could get away with parody. Write it up! Those Amish romances have taken off, so who knows?