So, it's 1966 and it's Batman, so you're going to see villains making lots of puns relevant to their gimmicks: 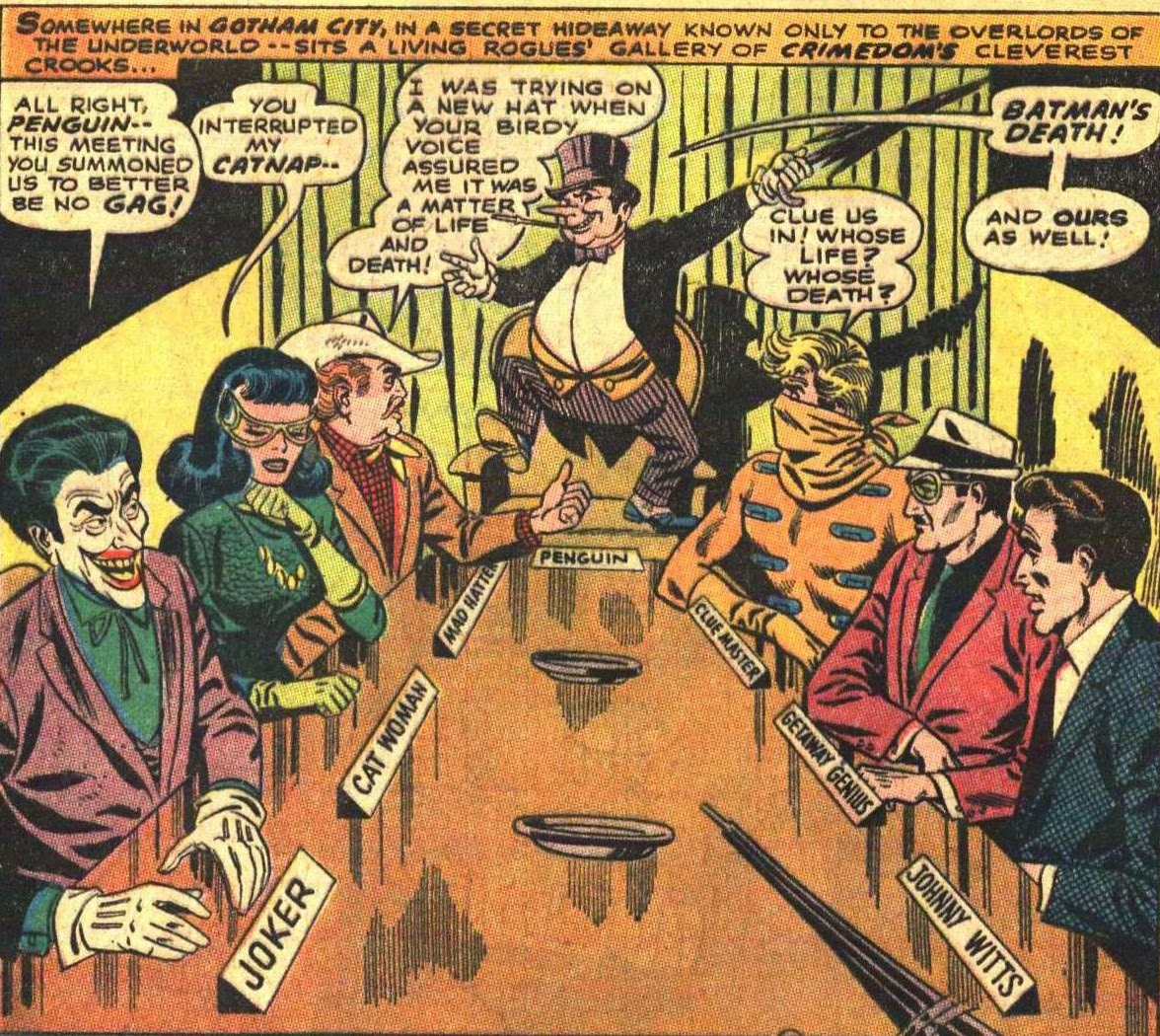 I'm not sure what the Bat-Tector is, but I'm sure I don't want to.

If you run Bat-Tector on the Google, you'll get nothin'.  Well, now you'll get this page because I mentioned it, but other than that... nothin'.

Now, this is awful: 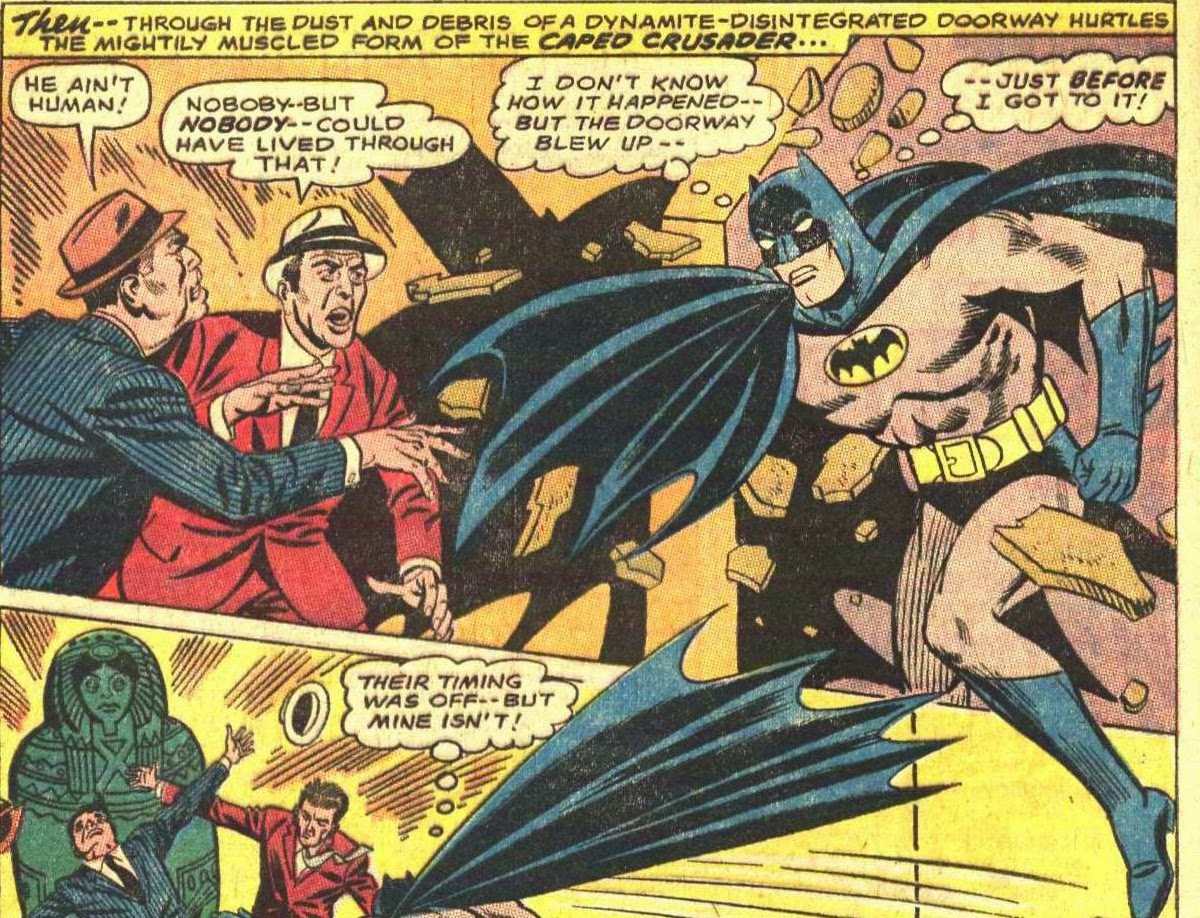 See Batman there?  Check out this from 2 years earlier: 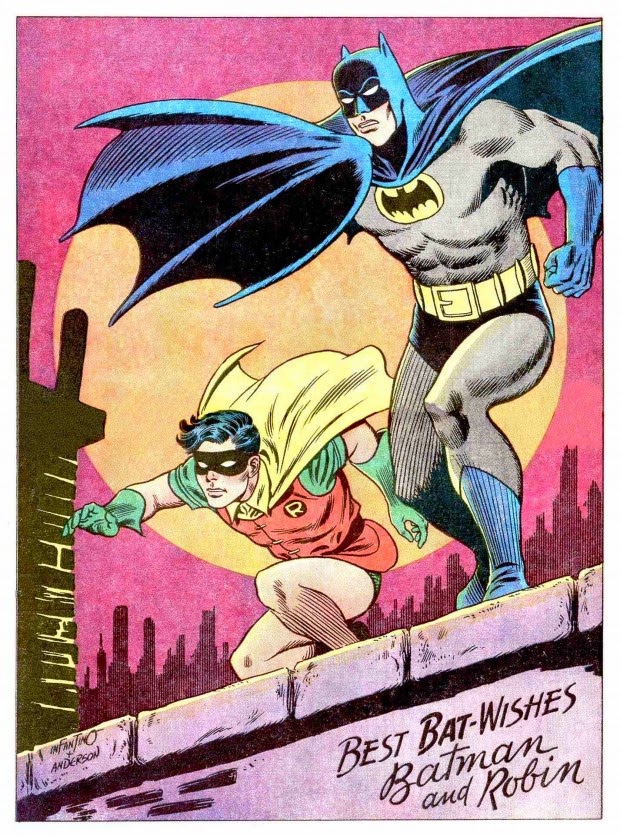 What makes this pathetic is the fact that this illustration, drawn by the legendary Carmine Infanto 2 years earlier, is freakin' iconic.  If you're going to do a cut and paste, pick something a bit less obvious.

Remember yesterday when I was complaining about Catwoman's green costume?  It wasn't just me: 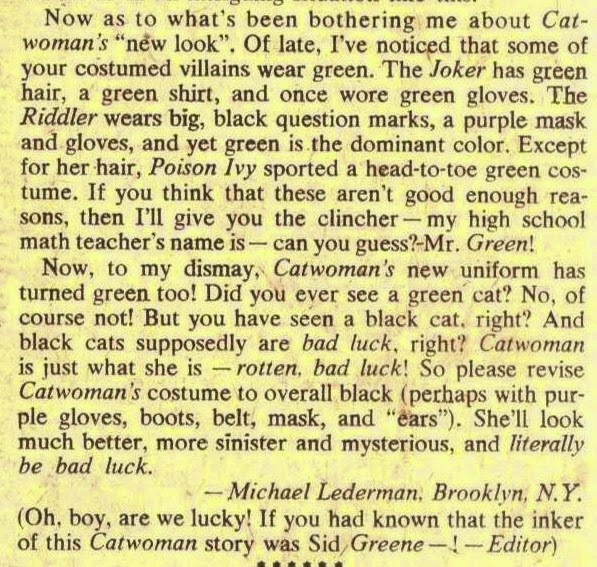 Hmmmm... I'm starting to think that DC and Marvel both owe Michael Lederman of Brooklyn a royalty.

Okay, you buried the lead!

Cluemaster? Whatever, the Riddler's on vacation.

"JOHNNY WITTS"? What the hell is a Johnny Witts and how did it get to be at that table?!

Johnny Witts was actually something of a player back in the day. He was a guy who arguably was on par with Bats when it came to scheming. He was similar to the Getaway Genius in that he would often outmaneuver Bats through careful planning.

He had appeared twice before this story. He'd show up one last time in the Super Friends comic a decade later. I'd kinda like to see him return. They made Catman a cool character, and he was miles behind Johnny Witts.

I agree that the Riddler should have been there. He was my favorite Bat villain when I was a kid, and it vexed me how under-used he was. He even appeared in the opening of "The New Adventures of Batman" cartoon in the late 1970's, but didn't make an appearance at all.

Not sure if Scipio is asserting that "Getaway Genius" appeared in the Manhunter series. It's true that Manhunter did have a similarly named villain, "Getaway Mastermind," who popped up for one episode of that series but is probably better known for a subsequent JLA appearance.

"Getaway Genius" was an independent character created for one of the Bat-books. He did use the same motifs, but I doubt that his creator, whoever it was, had been reading the Manhunter backup with any attention. The writer probably came up with the villain just to sell Julie Schwartz with more goofball cover-ideas.

Like the Genius, Johnny Witts was another two-hit wonder who disappeared after this august gathering of Bat-villains. Count your blessings that the writer didn't revive some of the one-hit losers of the period. I remember some guy who used to call out abbreviated commands to his henchmen, like UTE ("Use the Extinguisher:).

The Getaway Genius made a brief comeback in the 1970s, sporting a nifty pair of sideburns. He also got invited to big team-up of bat-villains in Detective Comics #526 (which is more than can be said for Jonny Witts).

Okay, I have to find the ish with the guy who used abbreviated commands. HAVE to.

Wait, this dude's math teacher was named Mr. Greene, and he thought that was germane to the subject of Catwoman's costume? Wha...?

It looks to me like the Infantino swipe was more than a simple cut and paste. There's a bunch of different shading in the cape and the belt has that little flap of leather that sticks out past the buckle.