NOSES AT THE READY! AIM! FIRE! LOTS OF FIRE!

Sorry about the delay, but I've been having some technical difficulties.  There is always the possibility that weather may knock me off the grid, so bear with me.

Meanwhile, let's take a look at Startling Comics #32.  The Fighting Yank didn't really have any rogues that I can recall, but it may be that they were so awful I tried to blot them from my memory. 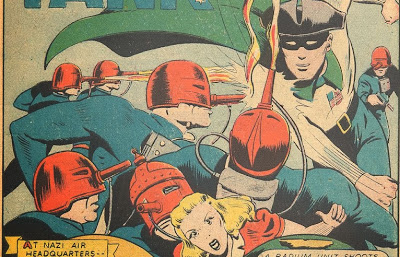 So, they just fly, and... well, they shoot flames from their noses: 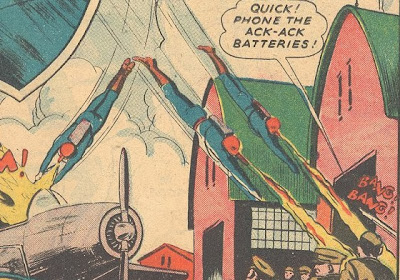 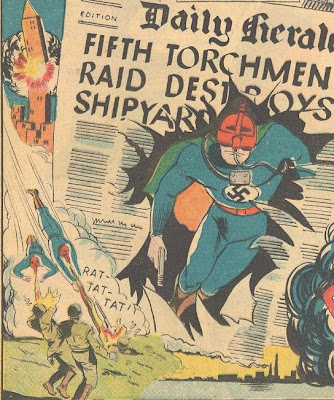 You know, there's just no way that they aren't going to look ridiculous.

I've noticed that the bad guys have finally figured out that the best way to deal with the Yank's cloak of invulnerability is to just yank (get it?) it off of him:

This is the second issue in a row where I've seen that, and I suspect it's going to be up there with "Green Lantern getting hit in the head with random wooden objects" in terms of frequency.  Unless he does the sensible thing and attached the cloak around his neck with rivets or something... which I'm prepared to guess never crosses his mind. 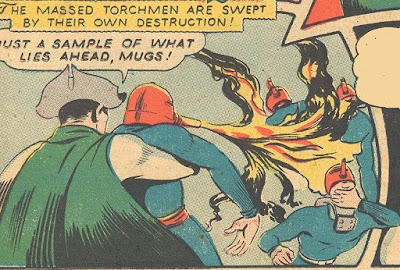 I've said it before and I'll say it again: A hero is only as good as his villain.  When you're fighting a bunch of guys who shoot flames from their noses, there's no dignified way to go about it.  That being said, they'll probably be revamped by DC in the next reboot.

See you tomorrow!
Posted by Adam Barnett at 10:03 AM

Now I am curious about the slang term "mugs"

Imagine if one of them gets a cold or has allergy's.