The Magic of the Walkman Thursday!

Hi, Dear Ones! I'll be with you in a sec. First, I've gotta take care of some business here:

I have been running an enterprise, a blog to be exact, that has been well-received but has failed to generate any profit for over two years now. As the CEO or whatever of said failed business, I would like to ask for my share of the bailout. As an executive or something, I am perfectly fine with the $500,000 salary cap.

Now that we got that out of the way, let's consider where we are in the Avengers. The team had apparently decided that the Scarlet Witch didn't bring enough boredom into the fold, so they also deputized the Swordsman and Mantis. Both the Swordsman and Mantis characters are used today, I think just to tick me off and keep Thunderbolts and Avengers from being too awesome for our brains to handle.

Anyhoo, despite the addition of these lame characters, the Avengers during that run had its moments. Here's a classic scene from Avengers v1 #119, where the Collector is defeated by the sheer annoyance of comic book geeks like ye and me: 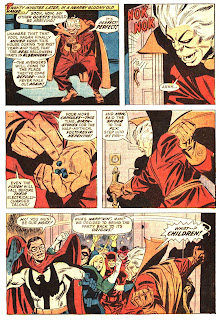 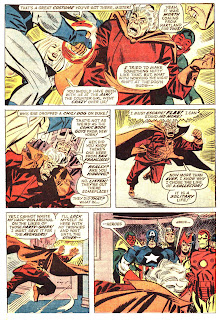 You know what else is awesome? Tape recorders. At least, Thor seems to think so, courtesy of Avengers v1 #120: 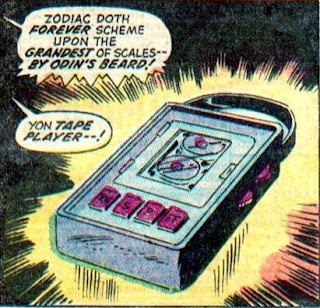 And hey! It's time for more Fun with Out of Context Dialogue!(tm!)

See you tomorrow!
Posted by Adam Barnett at 11:48 AM

Mantis is currently appearing in Guardians of the Galaxy, where she's on the same team as Bug (from the Micronauts), Adam Warlock, Starlord, Groot (the giant tree alien), and ROCKET RACCOON, among others. Yes, Rocket Raccoon. No shit.

That this series is not a complete disaster would be miracle enough...but actually, it's pretty good, especially if you like Marvel's cosmic milieu.

Those Halloween issues were so cool. Marvel did them every few years, and I expect DC did as well. They usually featured real-life comic book writers and artists as guest stars!

Too bad for The Collector that Marvel hadn't yet retconned him into a cosmic entity ("Elder of the Universe"), as they did 50 or so Avengers issues later. If he was what he's eventually be, he could have simply vaporized all those pesky fanboys without even thinking about it!

You know, I read the Secret Invasion crossover chapters of Guardians of the Galaxy, and I wanted to like it. I truly did. So far, though.... I don't get it.

Then again, I didn't get Young Avengers until I read the first two TPB's, and now I like it a lot. I probably will give GOTG a go and start from the beginning.

But only because of Bug and Rocket Raccoon.

Adam, you should have hit Bush up for a bailout when he was still in office. You could have made MILLIONS! ;-)

Hey, I actually have that Avengers issue,and it is a dandy.

Adam, if you just add the words "savings and Loan" to the title of your blog, you're golden!

I would ask Obama for a bailout but I am not ACORN, or a leftie organization who got him in office, a union thug or crooked banker. Darn. Forget asking for a job, I paid my taxes every year, myself!!