Know why I really enjoy Golden Age comics? Because they're awesome: 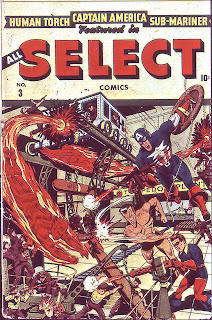 Tell me you wouldn't buy that comic. You totally would. There is more going on in that cover than in the entire run of Checkmate. It rocks.

My only concern is that Bucky appears to be shooting at the guys in the yellow shirts while Captain America, Namor and the Torches are all fighting the soldiers. Do you think Bucky was going all Full Metal Jacket or something? Maybe he wasn't paying attention during the mission briefing. Kids have no attention span.
____________________________________

Something you can't get enough of? Super heroes fighting gorillas: 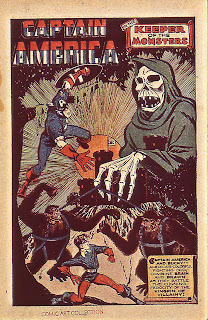 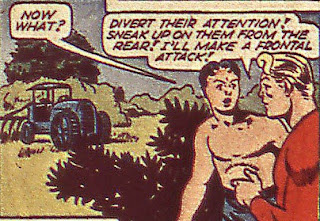 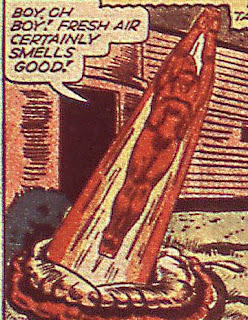 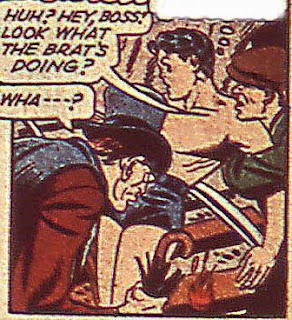 Oh, that is an unfortunate camera angle. Someone needs to move. No, seriously. Someone. Needs. To. Move.

See you tomorrow!
Posted by Adam Barnett at 3:32 PM

Poor ol' Toro. You know, MOST kid sidekicks at least got to wear clothing instead of running around in just BVDs!

So, that's why he did get the whole "what" out.

"Show us on the doll where the pirate touched you."

If that cover with the gorillas is any indication, Bucky's bones are made of the same spongy substance as most of the women on the covers of today's comics.

Oh..My! I believe that words actually fail me.

Looks like Cap is guilty of friendly fire against the Torch. Get it? Fire?

Fine. I'll leave the comedy to the professionals ;-)

When I was pretty little, I remember reading an issue of the Invaders in a drugstore. The Nazis had captured the Invaders, as they do, and were parading around with the Human Torch in a big vacuum tube, so he couldn't catch fire. It drove me crazy, since I couldn't figure out how the Torch could survive without air. Years later, duh, 'cause he's a robot. Frickin' comics, I swear...

@googum - I read something once that was probably from one of the guys working on that comic. Something to the effect of "never assume your reader knows about your character."

Yet another reason I love super heroes but hate reading comics :-)