Hey, it's Childhood Pal Scott's birthday! Wish him a good one!

And could someone slap some sense into Robert Downey Jr. and Christian Bale? Guys, it's the characters we're watching. You do a fine job and all, but there's no one that can't be replaced by someone who would appreciate the opportunity to do so. Let's act a little grateful and not indulge in so much douchebaggery, what say?

And speaking of drama queens: 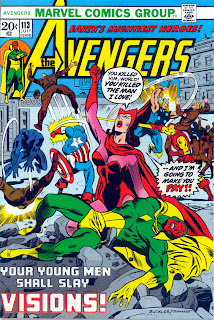 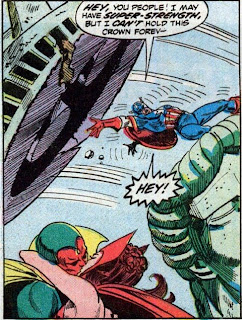 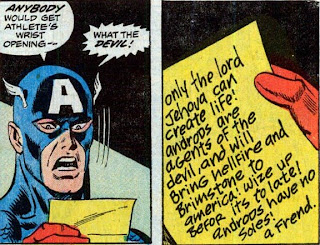 Hey! I see we have a new entry in the Character Hall of Shame!(tm!):

Yes, they were exactly what you think. They went around blowing themselves up. They also didn't wear pants. Probably because there's no sense wearing pants if you're just going to blow yourself up. I mean, you've blown yourself up and you've ruined a perfectly good set of trousers. You see where I'm going with this.

Black Panther learns the hard way he should have majored in something else in undergrad:

You can shoot people for pseudo-intellectualism? I didn't know that! I'm going charge up my taser and head to Starbucks!

See you tomorrow!
Posted by Adam Barnett at 3:03 PM

Rush Limbaugh? He may be many things but a Christian zealot isn't one of them. The joke would have made better sense if you'd used Rick Warren.

More importantly, when did Cap get "superstrength?"

"Your Young Men May Slay Visions?" What the heck kind of comic book story title is THAT?

The title has the word "shall," not "may," and it's based on "Your young men shall see visions" - a quote from the Bible, you illiterate Philistine.

More importantly, Cap doesn't have "superstrength." Nor would he brag about it.

Hey now, there's no need to be insulting. I've never called you a bad thing in my life.

Oh Wanda. You should see her when you computer needs rebooting. Drama Queen doesn't even BEGIN to describe it.

Chance, I'm very glad that you know your bible, but please don't be arrogant about it.

Suicide bombers in a 70s comic. Kind of prescient,huh?

More importantly, Cap doesn't have "superstrength." Nor would he brag about it.

Actually he did, for a short while, around that time! FWIR, it was a side-effect from an antidote he drank to a poison dart the Viper shot him with. Happened around issue 161-162 of Cap's own magazine. He lost the super strength again a few issues later.

Not bad for a comic I haven't re-read in 30 years!

Elie, you got it mister! Cap had super-strength beyond the super-soldier serum induced ability he's always had.

Come on, guys. Chance was being silly, and I didn't get the title reference either, Green. I just thought it was a really, really bad title. If Chance really thinks you're a Philistine, which I doubt, I'm one right along with you.

Everyone shake hands and show the love! :-)

Thank you, Adam. :-) Perhaps I did overreact. My apologies if that's the case.

"He lost the super strength again a few issues later."

Actually, it was more like a few years later.

Yeah, you're probably not an ancient Middle eastern tribesman. Also, I was totally wrong about the superstrength thing, so there's that.