I know they didn't mean this to be, but this is one of the most racist things I've ever read.

Let me set it up for you. Superboy and Clark Kent are split into two people by red kryptonite, just like in Superman III (yes, Hollywood will even recycle bad ideas). To hide from his evil alter-ego, Superboy tries to set up a new secret identity: 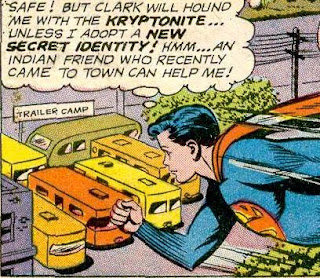 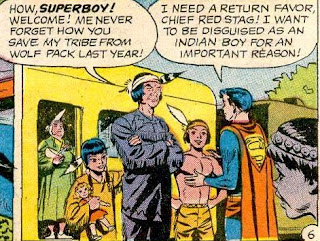 It shame me never learn to speak properly, but everyone know that Native American biologically incapable of losing accent that make us sound like Bizarro! 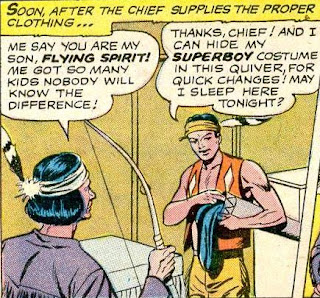 Yes, me have so many children, one more not noticed! After all, my people have nothing better to do than procreate and drink fire water! You got-um any fire water? 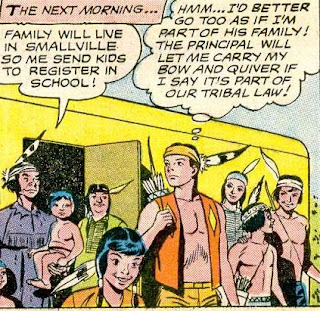 They'll have to let me take weapons into school if I tell them it's part of tribal law!

Okay, #1, no school in the United States is going to let a child tote weapons in, tribal law or not. And #2, even if the school is run by overly-sensitive, politically-correct morons, wouldn't they require some type of authentication that it is a tribal law? I mean, that's a ticket to get out of anything. Me no can have homework, teacher! It tribal law! Me can not run laps, Coach! It tribal law! You have to let me shower with cheerleaders! It tribal law!

Shenanigans! No way will that work! 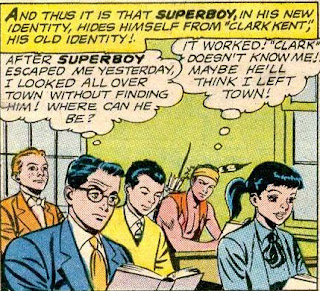 Well, Jumpin' Jimmy Swaggart on a pogo stick! There he is! They wouldn't let kids wear jeans to school in those days, but there's a bare-chested Native American kid with a quiver full of sharp projectile weapons!

This is why I never understood the educational system....
Posted by Adam Barnett at 2:49 PM

When my dad went to school ('40s & '50s) there was one kid who brought his rifle to school because he needed it to hunt for dinner on the way home.

BTW that almost looks like Jimmy Olsen sitting behind Clark in the final panel. I suppose it's a good thing Roy Thomas didn't see it, he probably would have used it as an excuse to write a story where Jimmy goes back in time. ;-)

I don't understand. Why does Superboy feel compelled to attend class? It's not like they'll wonder where he's at, because the Kent half is there. If he knows that it's Red K, all he needs to do is wait 48 hours & the effects disappear. Plus doesn't anyone notice that the new Native American kid is a dead ringer for Clark? Oh that's right, Clark wears glasses! They couldn't look more different. Silver Age silliness make brain hurt!

What's really amazing is that the other students don't seem to be paying any attention at all to this faux Indian, sitting there bare-chested and with a feather in his hair!

They are really progressive in Smallville.

Larry, I direct your attention to Superman #330 where the glasses silliness is explained in a very convoluted and silly manner.

Here's a review of the issue.

Maybe it's because I'm blind in one eye and have depth perception issues, but why is superboy feeling up the young boy in the second panel?

Hmm...and wouldn't Lana Lang have some fun trying to decide whether a bare chested Native Indian, who has suddenly appeared out of the -uh - blue, would make a better Superboy than geeky Clark Kent...