In Which the Blackout Continues, and My Standards Get Lower and Lower

There's still no electricity at my house. It is currently 47 degrees inside, a mere 15 degrees away from freezing. That was a mighty cold weekend. The nearest guess is tomorrow. The crews are working as hard as they can, but 8 days of no electric are starting to wear on me.

So, let's brighten the mood by taking a perfectly innocent panel out of context and turning it into something filthy: 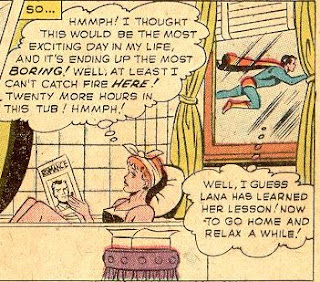 Lana, Lana, Lana.... if you'd make him wear a super-condom and visit the Health Department every so often, you might not have those "sudden bursts of flame" down there! Sit in that bathtub and think about what you've done. 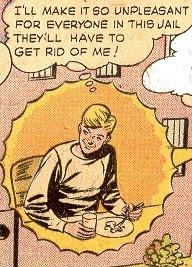 I'll become such a nuisance, they'll throw me out of jail! 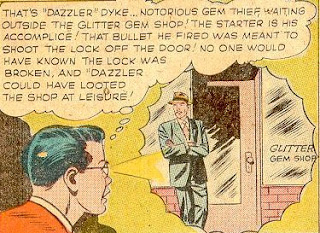 A rare early appearance by the Dazzler before her sex-change operation. And, no.... that's the last name they gave the character. I'm not touching that one.

For non-comic readers: Dazzler is an awful character that came out about 20 years after this panel was printed. She was a mutant disco singer who roller-skated. I wish I were kidding.
Posted by Adam Barnett at 3:05 PM

Dazzler did get better though. Not by much, but it was better. ;-)

I'm an unabashed fan of the cover to the graphic novel classic, Dazzler: The Movie. There's just something about its 80's grandeur I can't say no to.

Yesterday I showed an early Dazzler to my Roller Derby nerd girl. For the 80s, the skating, the disco and such.

Then, I showed her the one where she takes on Galactus.

Y'know.. when a girl gets the beautiful comedic cheese factor of something like that? That's a keeper.

Lana is so straitlaced she wears a swimsuit in the tub?

Wait...this Dazzler fellow is a NOTORIOUS jewel theif, who is oh so casually lounging outside of a jewelry store...do we have to hit the cops over the head in Smallville before they notice things, or are they just so used to having Superboy around, that they don't NEED to do their jobs?

And I'm not touching the second one with a twelve foot pole.

Hope you get your fershlugginer electricity back soon!