Wow, where did 2007 go? As I get older, the years get shorter. But that's okay, because it gives me an excuse to talk about the Year that Was!

Yes, I know I'm a sconce early, but I'm going to be off until Wednesday, so there you go.

Character I thought I Liked but Discovered in 2007 I Really Don't? The 3-D Man: 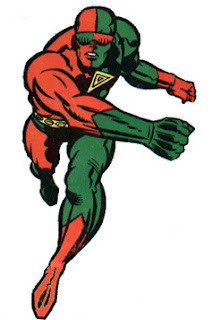 I don't know why I thought he was cool when I was twelve. No, that's not true. I liked the freaky costume. But I re-read the Marvel Premiere issues he was in, and almost lost consciousness. 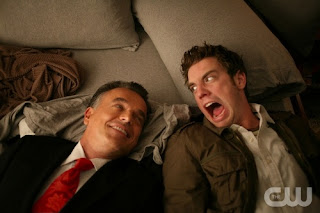 If you read comics but aren't watching Reaper, turn in your Comic Book Nerd Membership Card. A home improvement warehouse employee learns that his parents sold his soul to the Devil as a child, and he's obliged to round up souls that escaped from Hell. How can you not watch that? Brilliant stuff. 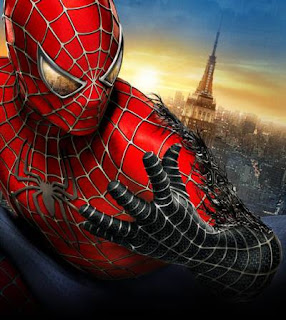 Yeah, I know. It was hyped to death, but it delivered the goods. Ghost Rider and Fantastic Four: Rise of the Silver Surfer weren't bad, either.

Most Unsettling Picture of a Cute Bear About to Blow a Lion's Brains Out? Right 'chere: 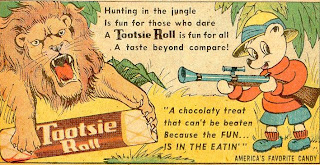 Have a safe and happy holiday, everybody!
Posted by Adam Barnett at 3:20 PM

I loved H-E-R-O as well, but not so much towards the end, when it dropped the "anthology" format, and when Young Dale Eaglesham (and his clunky, not-quite-professional artwork) came on board. (Seriously, even nowadays, everybody he draws looks all shiny and taut and shit, like they're composed entirely of vinyl.)

That Tootsie Roll ad is good ol' fashioned nightmare fuel! Somebody oughta PhotoShop the aftermath of that panel.

I hope you had a nice holiday!

Um...wouldn't it be a good idea to LET the lion have the Tootsie Roll?

sallyp - as the text says, for that bear, the fun is in the eatin', and he ain't talking about no tootsie roll!

blockade - you know, the artwork wasn't the greatest, but I loved how it tied in all the anthology characters. it knew it was ending, and spent those last issues tying the whole thing together, which has rarely (if ever) been done in an anthology book. it made me love the series all the more, although I would have gladly sacrificed it if they had kept it going. good stuff. be safe!

Never take a Tootsie Roll away from a cute bear that's heavily armed!