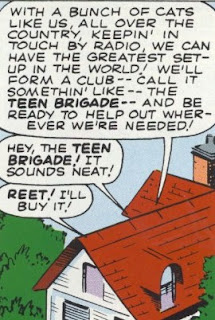 I was originally going to pick on Stan Lee for making up a word, but I looked it up, and "reet" is actually recognized slang (it means "alright"). So, rather than throw away the joke just because it turns out I was wrong, I am instead going to pick on Stan for using a word that, although quite real, should have never seen the light of day. I realize I'm just as guilty as Stan for reprinting this little gem of dialogue, but it's still just wrong. "Reet" may be a word, but it is by no means a good word. 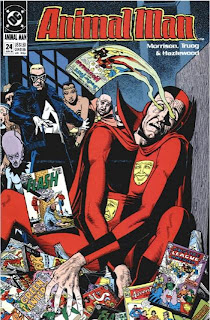 This perfectly nifty cover of Animal Man shows just how effective we can be with no words at all. See the anguish in the face of the Pscycho Pirate, coupled with the horror Buddy and the others feel as they watch real comics come out of him? Beautiful symbolism that only the Psycho Pirate lived with the memory of Crisis on Infinite Earths and continued to be tormented by it for years to come.

Now imagine that cover with the Psycho Pirate saying "Reet!"

You get what I'm saying. Don't pretend you don't.
Posted by Adam Barnett at 10:48 AM

"Reet" is acceptable only when spoken by Cab Calloway. It is off-limits to everyone else, especially members of Rick Jones' Teen Brigade.

It's also the name of a comic-zine I made for four years!
www.reetcomic.co.uk