In Which Mysterious Vapor Solves Everything

Getting back in the saddle for now.  Beloved is having another surgery at the end of the month, so posts for the 6 weeks or so after that will most likely be few and far between as Nurse Adam reports for duty.

Much as I hate to leave Spider-Man and the Angel hanging, contributor Robert Gillis has found yet more weirdness from Jimmy Olsen.  I think the secret to dealing with Jimmy's solo title wasn't finding the weirdness, it was selecting which weirdness to focus upon among the sea of bizarre instances.

That being said, here's Jimmy in drag wearing handcuffs beating up a fake cop: 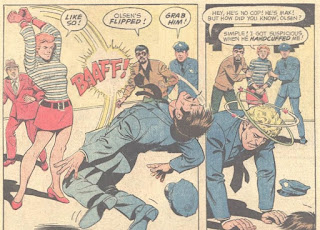 I'm not sure what led up to this, but it's probably best we don't know.  And did you notice that Jimmy hit the guy so hard his hair color changed?  Maybe I'm not giving Jimmy enough credit.

Next, Robert gives us the first entry into a new CMNS meme we're going to use whenever there is a half-assed deus ex machina that the writer tries to pass off as provable by the scientific method.

For further examples, check out the origins of any of the Flashes.

Not to ruin the fun, but the guy's hair color didn't change, Jimmy just knocked his wig off. It's in the bottom right corner of the second panel. (Sorry.)

I kind of do and kind of don't want to know what Jimmy meant with "I got suspicious when he handcuffed me". I mean, I'm sure there's a logical (well, "logical" by Silver Age standards) reason that Jimmy figured it out, but that reason can probably only disappoint. :|

The post-Kirby Jimmy Olsen comics were actually sillier than the old Mort Weisinger ones.

Real cops handcuff suspects with their hands behind their backs, so they can't do what Jimmy did.

Ah, I figured it was probably something boring like that. Given how often comics, TV, movies, and whatnot have the police handcuff someone the wrong way (even when they do cuff behind the back, they'll still frequently cuff the suspect with their palms facing each other), I wasn't sure if that was the explanation or just something that happened. Ah, well, even Jimmy Olsen has to rely on mundane explanations some times, I guess.