Lightmaster Should Probably Just Change His Name to "Mysterious Mastermind" at This Point. I Mean, It's Been Twice.

Hey!  It's time for a mystery villain! 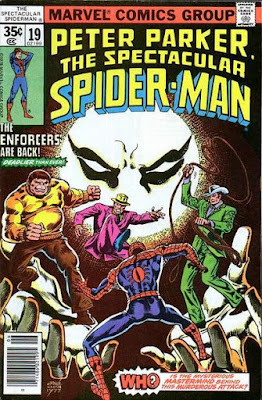 Spoiler: It's Lightmaster again.  Yeah, the same "mysterious mastermind" we met at the start of the series.  I guess any time someone seems to be working behind the scenes, Spidey should see if Lightmaster has an alibi.  It would probably save a lot of time.

Read it with a Brooklyn accent: "AGAIN with the Enforcers!  Oy!" 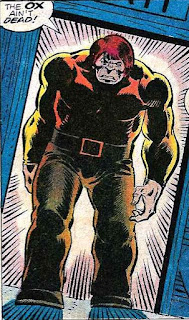 Well, we thought he was at the time, having died more than once (it's complicated) here: 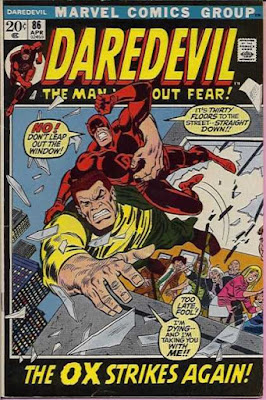 MUCH later, we would learn that the Ox survived because death is rarely fatal in comics except for Ted Kord which still annoys me. 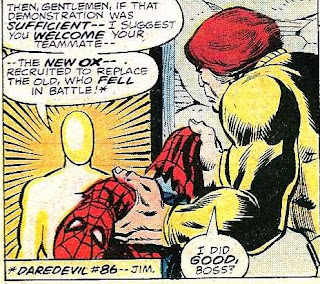 This is the Ox's brother, although we aren't told that this issue.  I guess the powers that be decided readers were only paying thirty-five cents here, so they didn't have to cover all their bases. 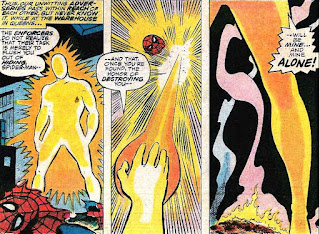 Sooooo... Lightmaster is recruiting the enforcers to do his dirty work and he plans on betraying them once they've served their purpose?  Like he did with Kraven and Vanilla Chicken?

Now, in defense of the story, the Enforcers aren't a particularly bright group of people.  This was also before cell phones, much less an internet or a Yelp, so the Enforcers would be clueless of this unless they called Kraven or Vanilla Chicken to check out Lightmaster's references.

Still stewing over the Frisbee incident?  You know, it's not like she threw a buzz saw blade at them. 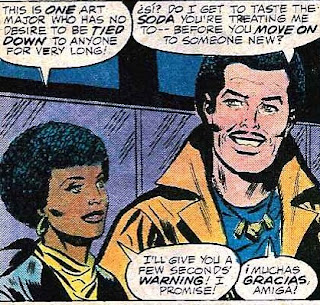 Okay, we now see that Holly's "this is one art major" is her thing.  A) It's a way of speaking of herself in the third person and B) it's a way of letting you know she's better than the rest of us because she's an artist and don't you forget it.

Wow.  Who came up with her?  She's more annoying than Ambush Bug.

So, anyway, they're at the Coffee Bean and the Enforcers take everyone hostage to lure Spidey there, giving us an excuse for a great full-page panel: 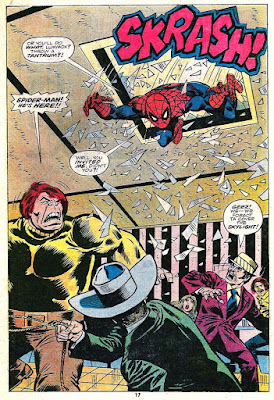 And then Holly starts her stuff again: 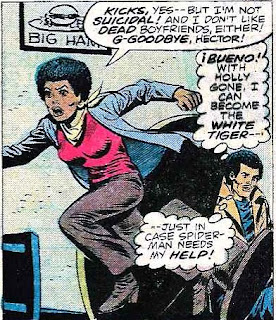 YAY!  She's gone!  Yes!  I hope she caught some friendly fire from the police surrounding the building. 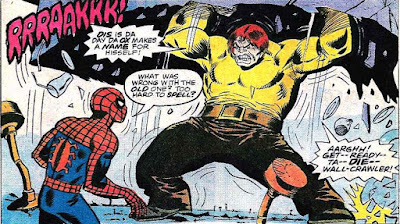 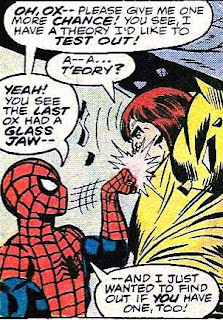 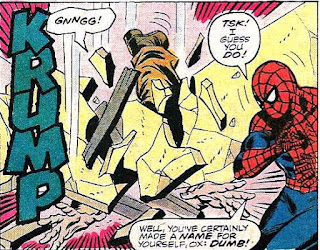 I think Spidey is at his best when his dialogue sounds like it came out of a Bugs Bunny cartoon like that, don't you?

Um... Holly was also in the diner during the battle.  Clearly.  You could ask her about it instead of casually murdering the wrong guy.  I'm just thinking out loud here.

Ted Kord is alive, so you can relax.

"What was wrong with the old one? Too hard to spell?" This might just have been Spidey's funniest one-liner of all time!