In Which Adam Goes Very Lowbrow... You Should Probably Skip Today's Post Entirely

Dear Ones, Monday is Labor Day here in the States.  This means that, despite the name, you are expected to not labor.  So, we'll get back together on Tuesday, okay?

Moving right along to Master Comics #26!  Check out the blurb: 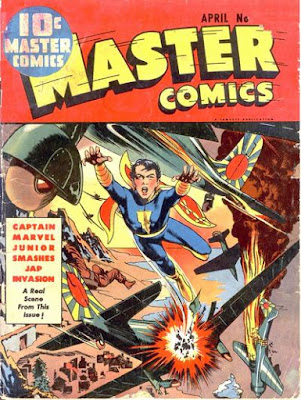 "A real scene from this issue" is an interesting pitch.  Comics from the Golden Age tended to be generic covers that often didn't have much to do with what was inside (which brings to mind those old World Finest covers that would show Batman and Superman doing something together on the cover like... I don't know, making croissants or something... while putting the two in separate solo stories in the comic itself), so this is an interesting experiment.  If we see more "scenes from the comic as covers," we'll know it must have had a positive impact on sales. 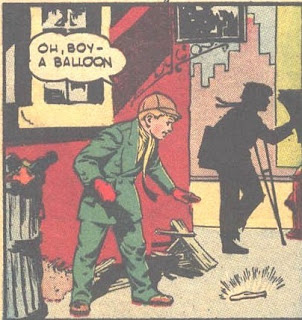 .... well, okay.  Never you mind.  But make sure you wash your mouth really well with alcohol as soon as you can.

At least if there was anything... "unfortunate" inside the "balloon," hopefully he didn't get any of that on ...

... well, okay.  Kid, you should probably be tested for, like, ... every disease known to humanity.  Even if it was just a balloon (and the jury is certainly out on that one), you really should be putting things like that in your mouth.

And then we start the blubbering, because he's a little kid in a comic book: 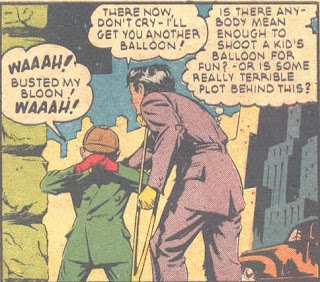 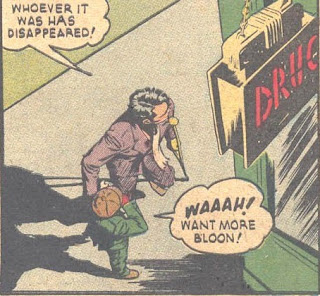 Do you remember in the Spider-Man 2 video game where the kid was always losing his balloon and you had to retrieve it for him?  It was an otherwise awesome game, but I would have webbed the balloon to that kid's hand if the game would have let me.

Hey!  It's time for some Fun with Out of Context Artwork! (tm!) 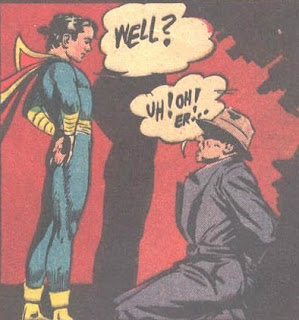 No, I'm not always completely proud of the content on this blog.  I play the hand I'm dealt.

Here's another odd bit of dialog: 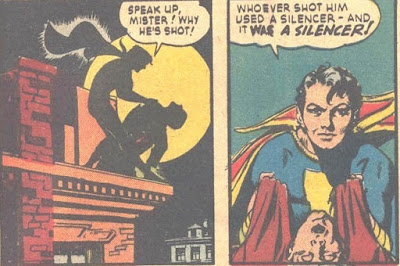 Well, yes... a silencer is a silencer, hence the name.  I feel like there's something more I'm supposed to take away from this and it's just not coming to me.

Anyway, remember when I complained about Junior saying his full name with no magic lightning?  They fixed that: 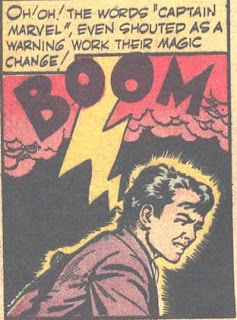 This is a noteworthy event, because it's one of the few times Freddy isn't instantly gagged or knocked unconscious:

So, what about that cover shot?  It's coming.  Check it out: 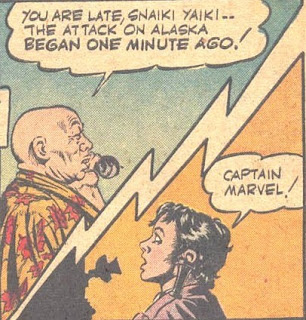 Yup.  Alaska is under attack, and Junior ain't having it. 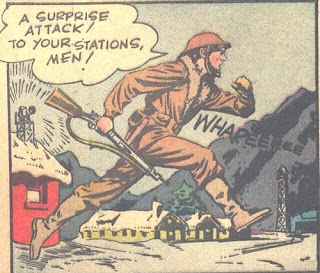 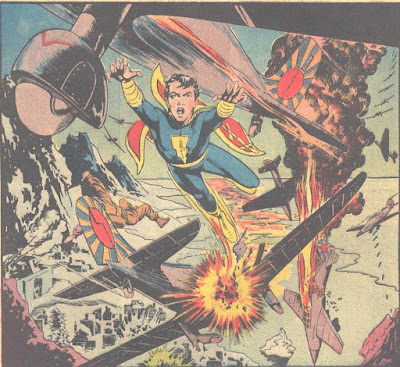 That is some beautiful artwork there.  I can see why they put it on the cover.  It was also probably therapeutic to see an American hero give a little payback to the flying Japanese planes.

Like most of the Golden Age stories that dealt directly with the war, it was clearly meant to encourage a fighting spirit and keep morale up, but they did it in a way that enhanced the story rather than building a story around the message.  Good stuff! 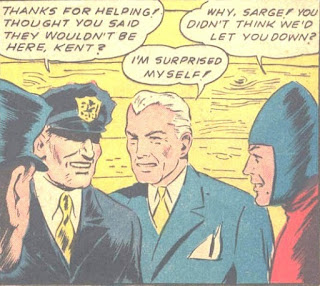 Hmmmm.... I see that Jim isn't bothering to hide his face from the Sarge at this point.  But the Sarge is either pretending not to know that Jim is Bulletman or is surprisingly unobservant for a police officer. 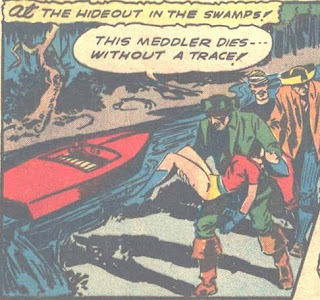 And she's tossed into an alligator pit: 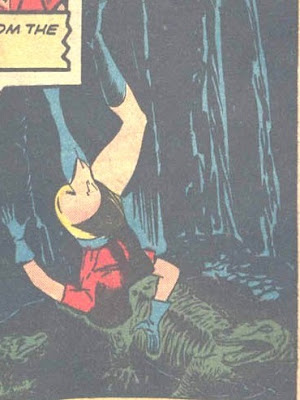 But just for a change: 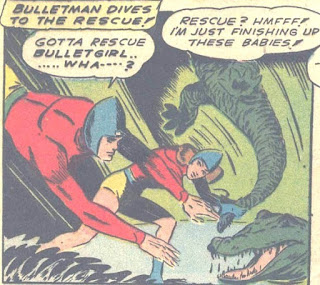 So Susan can fight off angry alligators, but she can't keep a person from sticking flowers in her face like we saw yesterday?  Her performance is what we might call "inconsistent." 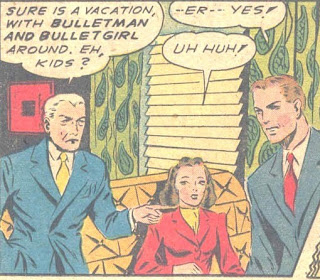 Oh, yeah... everyone was on a trip together.  I'll never understand how heroes in comics explain away the fact that they and their alter-ego are in a strange place at the same time.  I'm starting to think the Sarge is just waiting for them to come clean and is being all passive-aggressive about it.

Here's a follow-up to the chart we saw yesterday of Allied planes: 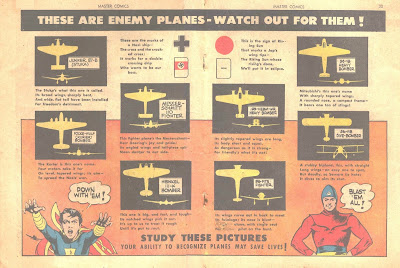 Yes, it makes sense that you should know the enemy planes just in case.  How sad the world must have seemed.  When I was growing up, we were dealing with the whole nuclear arms race thing but there wasn't anything you could do about that.  We just knew we could all die at any moment and your odds of survival were almost completely contingent on where you were standing relative to where the missile detonated.  They didn't even try to give us any false hope that we could take any safety precautions that I can recall.

Methinks the silencer line was intended to be a taste of bitter irony from the young Captain. The gun with a silencer...silenced the victim. Okay, so maybe CMJ isn't that good at irony. He's just a kid.

Attacking parachutists (pilots and crew; does not apply to airborne troops) who have bailed out of a disabled plane (as in panel #20) is a war crime according to Protocol I in addition to the Geneva Conventions. Captain Marvel Junior's acts would be considered by the military to be unchivalrous and even wanton killing, since the attacked personnel would eventually become POWs if landed over enemy territory. (Historical tidbit: recently (Nov. '15), Putin wanted to escalate war against Turkey when the CIA-backed Syrian Free Army machine-gunned in the air two Russian pilots who had bailed out of a doomed Sukhoi Su-24. Cooler heads prevailed, tho.)

Wow! I didn't know that, Cfl! Thanks for adding some awesome factoids!

"A Red Cross hospital! Let us bomb that first!"

I'm pretty sure that bombers (even Japanese ones) had their targets designated pre-flight rather than picking them ad lib with cackles of delight at their evilness.