So, I'm continuing my look at the Comet story from Pep Comics #1, and I believe I owe someone an amends.  Upon further review, it appears that you can always see his eyes through the glass in his visor, making yesterdays closing jabs inappropriate.  I apologize to... well, whoever gives a rip, which is probably no one.

Anyway, I read the rest of the Comet story, and ... this guy is badass.

But first, you have to find him.  Fortunately, someone has his home phone number: 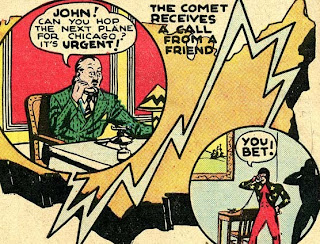 I had thought that this person was calling his civilian ID, but the Comet shows up in costume, so I'm not sure how that worked.  No one bothered to explain it.  I mean, if I call Childhood Pal Scotty and he shows up in his secret identity as SILVER MAN (so named because he came back from the Israeli Games with a chest full of silver medals in gymnastics... true story!), it wouldn't be hard for me to connect the dots.  Why this guy knows the Comet's identity, I have no idea.  But he clearly does.

And I couldn't help but notice that the Comet apparently just hangs out around the house in full super-hero gear.  I'm not judging anyone here.  I'm just making an observation.

This panel cracked me up: 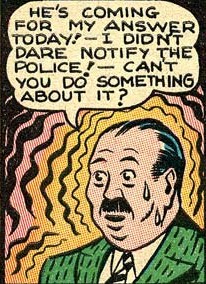 Egad, that's a nervous guy.  I'm nervous just looking at him.  Wavy lines in multi-colors and all that... pretty agitating stuff there.

Here's kind of a reverse Fun with Out of Context Dialogue (tm!): 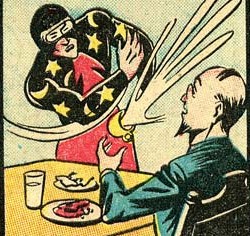 I tell you, this is the last time I eat at the Cheesecake Factory!

Yeah, it's a cheap shot, but so is Fun with Out of Context Dialogue! (tm!) 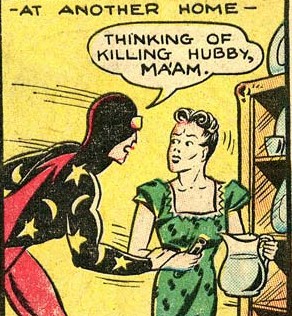 if so, can I have his shoes?  I seem to have disintegrated mine.

Now as I mentioned, the Comet is surprisingly badass.  Cooperate with him or don't, you're getting the stink-eye: 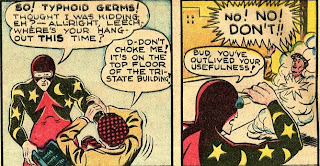 Way harsh.  He had disintegrated a crook's house a page or two earlier and I almost put that on, but it kind of paled in light of the subsequent murder spree the guy went on: 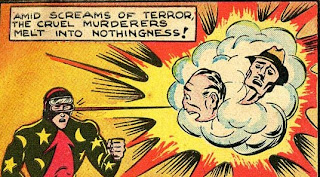 So think twice before you mess with the Comet.  All those stars and moons he's wearing?  That's the bait so he can go all "visor-lifty" on your ass... 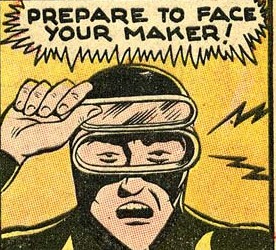 Email ThisBlogThis!Share to TwitterShare to FacebookShare to Pinterest
Labels: comet, due process - shmoo process, Fun with Out of Context Dialogue, golden age, new words I just made up

Back in the day, super"heroes" were mass murderers. That sure doesn't seem very heroy to me.


Yeah,the Golden Age superheroes would kill at the drop of a hat. Perhaps that reflected draconian public attitudes towards crime.