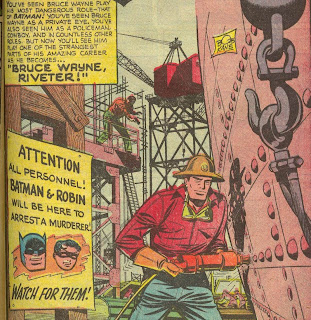 Don't you love the warning that's posted there? Batman and Robin are coming to arrest a murderer! We won't give you any warning before we make you pee in a cup to see if you smoked weed over the weekend, but if you've killed a guy, this is your chance to duck the consequences! Sign up for the Employee Softball Team in the Office! 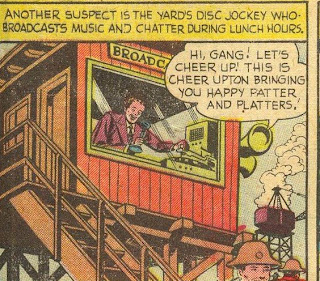 I refuse to believe this was ever a real job. I suppose they didn't have portable radios in 1950 (or did they?)? Has anyone ever heard of construction sites hiring their own deejay? And would you ever hire a man who called himself "Cheer Upton"? I don't think I would...

This was just interesting from a historical perspective: 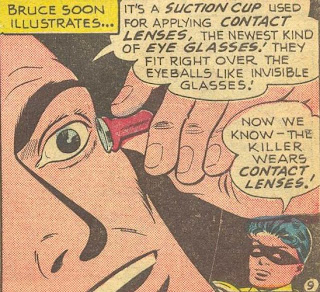 So, the contact lens was new in 1950. I've seen that little suction cup device at some point in my life, but it obviously isn't very commonly used today. I've seen people moisten their contacts with their own saliva, which strikes me as quite gross. I did the Lasik thing about 7 years ago, and it was one of the best things I've ever done. It keeps me from leaving around evidence like contact lens suction cup thingies that might later link me to a homicide. And I'm pretty careless. That's exactly the sort of goober I would make.

See you tomorrow!
Posted by Adam Barnett at 12:49 PM

I find the whole "Batman and Robin as celebrities" thread from this book really funny.

"Criminals are a cowardly, superstitious lot, so we must wear costumes and strike under cover of darkness and never reveal our whereabouts - except if we're appearing at the county fair or opening a new mall!"

Robin doesn't realize that all we really know is, the killer used to wear contact lenses. He can't put them in anymore without his little eye plunger!

Obviously Cheer Upton isn't the murderer...he's the murderee! I've only known him for ten seconds, and I want to kill him.

Did Bruce employ some sort of disguise whilst investigating this crime? I certainly hope he didn't wander around refering to himself as "Bruce Wayne... Riveter!" all the time.

Then again, I hope he did. Then we'd get to invoke the beloved Hogshooter Oklahoma Rule!

"It keeps me from leaving around evidence like contact lens suction cup thingies that might later link me to a homicide. And I'm pretty careless. That's exactly the sort of goober I would make. "

I find that by not killing people I never have to worry about that sort of thing.

I've seen too much sci-fi to trust laser eye surgery. Besides, I go for the Clark Kent look. :)

re: lazik.
I always think of the Simpsons' episode set 20 years in the future. Bart goes to get money from Ned, who had lazik. The consequences are that everyone who underwent laser eye surgery had their eyes pop out 10 years after surgery. I know it's not likely to happen, but.......