Although he only pops up every so often, the Absorbing Man rules. I'm not sure whether he or the similarly-powered Amazing Man in DC came first, but this Marvel bad guy simply rocked. He was mean, tough, had an awesome power, and he carried around a big ball and chain. We need more guys like that.

That being said, check out how the Beast handles him:

Like I've said many times before, the Beast didn't get the respect he deserved in the Avengers, but he kept swinging and kept a good attitude.

Not that he always succeeded: 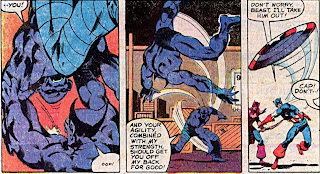 Okay, but look at Captain America butting in. Keep in mind that the guy's name is "The Absorbing Man." That gives you a pretty good idea of what his powers are, even if he hadn't already been known by the Avengers (which he was). So, throwing something made of an invulnerable substance right at the guy probably isn't the greatest strategy. 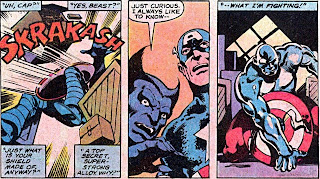 See what I mean? But not once does anyone call Cap a dumbass, which he clearly was. I hear all the time about what a master strategist Cap is, and all I have to do is break out this issue and say, "Exhibit A."

And it's time for Fun with Out of Context Dialogue!(TM!): 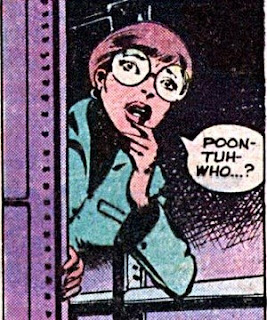 See you tomorrow!
Posted by Adam Barnett at 3:35 PM

Thats Pootie Tang to you.

I'm hoping you won't mind our borrowing one of your images at this post, which has a link to your post.

That's at a company blog that I edit. I'd be happy to add a credit line that says "Image courtesy of Comics Make No Sense," with another link to your blog URL.

But if you object, I'll remove the image at once. Thanks for considering it.

I've been reading through your backblog and greatly enjoying it. It seems to me that several Marvel B- and C-listers, like the Absorbing Man and Graviton ought to be bigger threats. I used to have the issue where the Absorbing Man absorbed Quasar's (Wendell Vaughn's) quantum bands.

Great article with excellent idea! I appreciate your post. Thanks so much and let keep on sharing your stuffs keep it up.
Business Directory and Information in Various Activity Sectors