Just Because You're Paranoid Doesn't Mean They Aren't Out to Get You Friday!

So, yesterday, we took a look at the Falcon and his persecution issues. I found it interesting that one didn't have to look very hard to see a self-fulfilling prophecy at work. First, with Thor:

Now, to be fair, Thor is often kind of a butt-head and Hawkeye is not only a jerk, but he's the guy who got kicked off the team to make room for the Falcon. So, it's not like these guys wouldn't have been schmucks to anyone in Sam's place. But, to be fair to Sam, I've seen a more welcoming group when I've watched Heathers. I haven't read the Falcon's tenure on the team since I was a teenager, so I'm watching this play out with a new perspective. 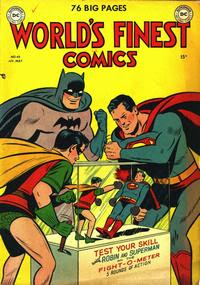 That, my friends, is one of the worst designs and marketing ideas I've ever seen. Who do you suppose built that awful contraption? Robin and Superman as a precursor to Rock'Em Sock'Em Robots, only it seems as though the only control is a lever you move from left to right. At least Batman had enough sense not to license his likeness to this. "Eh, I'll pass. Ask Robin."

Superman, on the other hand, will license his likeness to total crap. I give you:

Then again, no one is studying about me in school!: 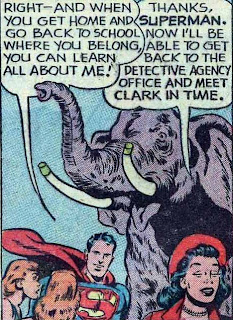 You know, even if it's true, it's a little conceited to bring it up. I think Clark's trying to score.

Anyway, I'm afraid that Monday is a holiday, so I'll see you Tuesday! Have a great one!
Posted by Adam Barnett at 3:27 PM

Wow. Thor really was a jerk, wasn't he? I've never read much of the avengers or the God of Thunder's solo title, and I'd always imagined blondie to be a sort of outgoing, back-slapping type of overly friendly guy. I'm finding out that's not the case. First, the blowing off Rick Jones to go to Valhalla, and now this.

This was one of my favorite runs on the Avengers. I like Falcon much more than Hawkeye. Plus, I like your reference to the film Heathers!

"But, Superman, we go to art school!"

"That's right, girls! And guess who's going to be your nude model this afternoon!"

And then the hypnotized elephant with the Kryptonite-tipped tusks lunged forward...