I am a huge mark for the Falcon, and I really couldn't tell you why. But once I saw him on the cover of the Avengers, I knew I had to start back in. The Falcon on the same team as the Beast? My love for B-list characters was getting the respect it deserved, at last! 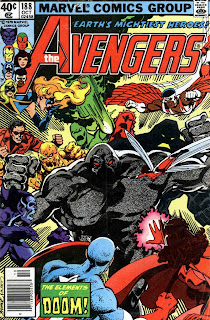 But, like the Beast, I don't know that Falc was treated with the same love I would have given him. More on that in a moment. First, it's time for Fun with Out-of-Context Dialogue!(tm!)

Okay, there's nothing really funny about it, but the use of the term "collective gasp." I'm not the most sociable of people, but I've been in a few crowds and I've never experienced a collective gasp, so I'm skeptical that it ever happens. I rarely even gasp, much less collectively. I think a collective fart, however, would be hilarious. Note to self: Submit story proposal to Marvel and DC where the characters utter a collective fart.

Where was I? Oh, yes. The Falcon. But first:

It surprised many that the Scarlet Witch was not a Harry Potter fan, citing that the books encouraged the exploitation of dragons.

What? Oh, I'm sorry. So, anyway, the Falcon came on board with a huge chip on his shoulder. Take this scene and multiply it by 10:

So, he assumes he's the product of Affirmative Action, which was somewhat true according to the government agent who ordered that he be a part of the team in the first place. But this whole, "No one listens to me" riff? 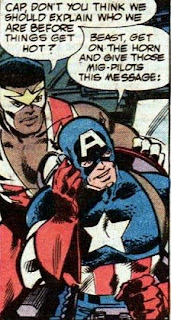 I don't know. It looks like Cap is taking Falc's advice there, so I'm not sure what the problem is. Frankly, I never pay much attention to people who whine that their opinions aren't solicited. If you have something to say, say it. If you don't, that's your problem.

Still loved the Falcon, though. Love that he's been part of the team for years. He's not really one of the Earth's Mightiest Heroes, but he's cool, and that's good enough for me.

See you tomorrow!
Posted by Adam Barnett at 1:20 PM

I like how Capt. America is falcon's best friend, on OTOH, Cap is also "The Man," who keeps him down. If Chris Rock was a comic book geek, he could do a whole show based on it.

Actually, if you knew the story of the previous issues of The Avengers at the point in time when The Falcon joined, you'd know that the team was ordered by the federal government to add him to increase diversity. The Avengers knew The Falcon was the token black member at that time. The Falcon knew the whole reason he was offered membership was as a token member. So the anger displayed was dramatically correct and important to the development of the storyline.

Oh, I said the feeling of tokenism was justified in my original post. But Cap *did* take the Falcon's advice very shortly before the panel where Sam felt no one cared about his opinions.

And, to be fair, the Avengers weren't exactly a group where they go around the room and everyone offers their two cents. If you weren't Captain America or Iron Man, the odds of anyone soliciting your opinion in the Avengers was pretty unlikely unless it was something right up your alley.

Sam had every right to be resentful of the government's actions in using him that way, but it could certainly be argued that his consternation with his *teammates* was misplaced. His feelings about being the "token" on the team were indeed valid (as I said in my post) and important to his storyline. I just wonder if he was being fair to the other members if that was his grievance was that no one listened to him when the story clearly showed otherwise.

Captain America isn't famous for following the suggestions of others, so it was noteworthy that he listened to Sam (although, considering their history in battle together, it wasn't too surprising). On the other hand, maybe it didn't mean anything to Sam that Cap was listening to him because they were friends before Sam ever walked in the door. Maybe he was hoping other members besides his best friend would include him and that's where the anger came from.

Hmmmmmmm.... it certainly made me think that Falcon may have had a valid beef after all. It's funny how one's perspective changes with age.

Fortunately, history has vindicated Sam and he's taken his rightful place in the history of the Avengers. He is and was a great character (he was more interesting than Cap in the "Captain America and the Falcon" run, that's for sure) and I squealed with delight when he was on the big screen in "Captain America: The Winter Soldier." I'm hopeful we'll see him in the Avengers movie sequel.