In Which the Mystery Villain, Who is the Lightmaster, is Revealed!

So for the first couple of issues, we had a mysterious badguy hiring Vanilla Chicken, then Vanilla Chicken and Tarantula.  Today's comic readers would expect this "mysterious badguy" angle to go on for about another ten issues with a crossover to every other Spider-Man title and a sideplot somewhere in a Marville revival.

But this was back in the day when comics were meant for younger readers with younger readers' budgets, so less than one American dollar bill got you the wrap-up: 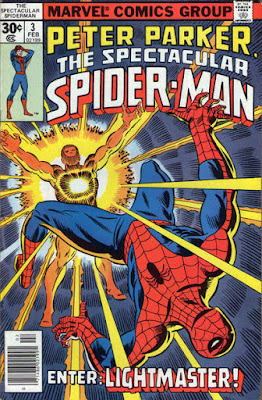 Granted, they kind of let the cat out of the bag a little early, what with putting said badguy on the cover and all.  Still.... less than one American dollar! 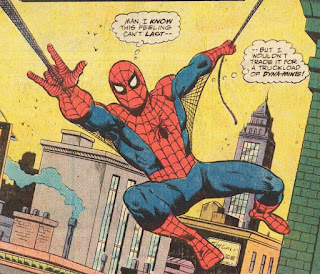 I admit, I had to use The Google to remember what Dyna-Mints were.  But then I was awash with memories of Dentyne's (the makers of the gum) version of Tic-Tacs!  They cost about half what Tic-Tacs cost and they had more flavor, so of course they didn't last long.  But they were tasty!

Okay... just in case you managed to get past the cover without a spoiler: The mystery badguy is Lightmaster.

Anyhoo, we know Vanilla Chicken wasn't killed off (though it's a fun thought), so here he is: 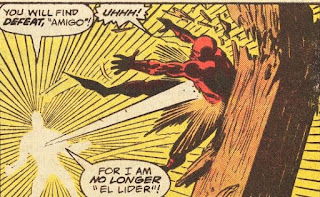 At the time this story was published, I don't believe it had been established that Green Lantern's ring constructed things out of "hard light."  The original Green Lantern just went from moving stuff around with his ring to actually making solid things without any explanation and we just went along with it because COMICS!

So, since Green Lantern eventually was known as creating "hard light" constructs with his ring, did his creative team borrow this concept from Lightmaster?  The mind boggles! 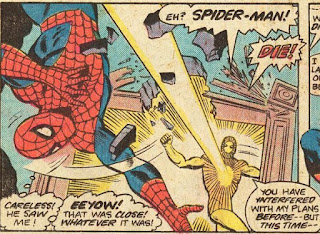 You know, I've never considered people whose weapons come out of their chest as that dangerous, like the Melter or even Iron Man.  The aiming ability and lack thereof just cuts down on the intimidation factor, know what I mean?

Anyway, Spidey has way too hard of a time putting this guy down: 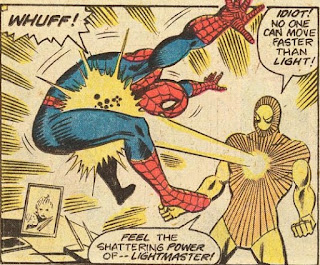 Okay, really?  Why would you dive at him instead of behind him?  That's right in the path of enemy fire!  Do we find out decades later this Spider-Man is really the clone or something? 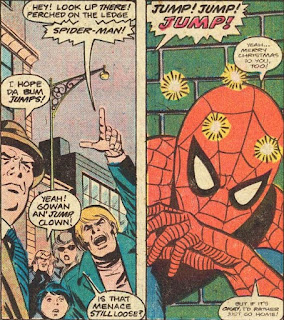 Apropos of nothing, of course, but this wasn't exactly one of Spidey's greatest battles.  On to issue #4!