The Sting of the Tarantula... Don't Believe the Hype 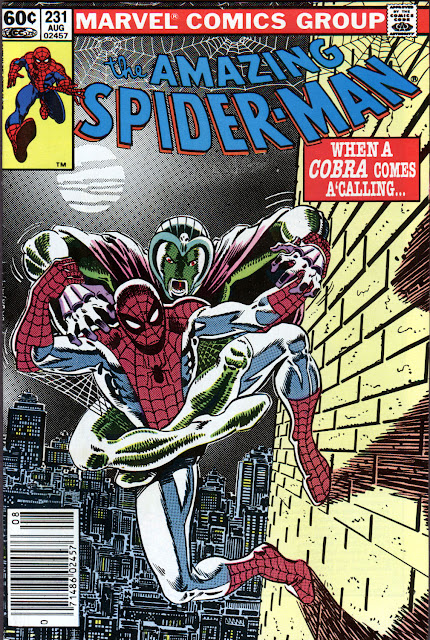 You would think that there would be tons of characters that use or used the name cobra, right?  Well, you'd be surprised.  While the name is used all over the place, there's almost always a qualifier: Dr. Cobra, El Cobra, Cobra Commander, etc.  There was a space pirate named Cobra who appeared in Space Adventure Cobra back in the 90's that was some sort of weird Japanese thing that all you kids seem to love these days, but other than that character and the Golden Age nemesis of Magno and Davey, I don't think there was another character who just went by that name.  Anyone think differently? 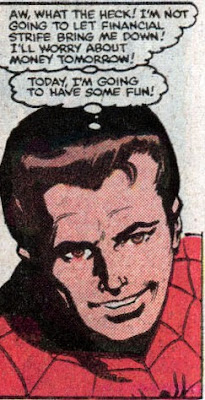 The Tarantula returned in Amazing #233, 99 issues since his first appearance.  As you may recall, he was the Jackal's badass enforcer back in the original "Clone Saga" storyline in 1974.

What a difference 8 years (and another writer) made...

Now, to be fair, I believe the Tarantula's memory of his weapons' effectiveness is a little skewed.  I think the only time he had actually made contact with his little toe-stickers was when he either snuck up on Pete or Pete had his hands full doing something else.  It's not like he was Bullseye with those things.  But unlike past encounters, Pete takes him down in no time flat, even though the Tarantula has added finger blades to his arsenal: 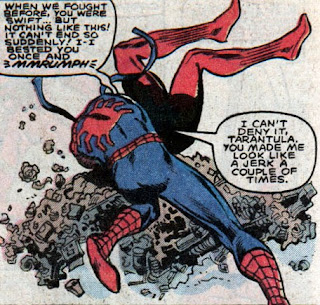 Wow.  That was quite a dis. But not unexpected, considering that the cover of the issue gave it all away... 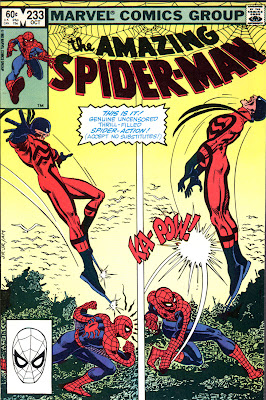 Yeah, that pretty much summed it up right there.  I probably could have saved myself sixty cents.

That's the first time I ever noticed one writer treat a character in a manner entirely different from another.  I notice it all the time now, particularly when the Juggernaut goes from a raging trash-talker to having the vernacular of Victor Von Doom.  Considering how scary the Tarantula seemed to be when I was six years old, it was very jarring to see that he was really a bush leaguer to someone in Spidey's class.

While I was researching this post, I came upon this great article that takes a look at the Tarantula's evolution from feared nemesis to minor annoyance.  It also gave me another look at a page where I found this little bit of Fun with Out of Context Dialogue(tm!) that I had previously missed:

Email ThisBlogThis!Share to TwitterShare to FacebookShare to Pinterest
Labels: Fun with Out of Context Dialogue, recycled names, spider-man, this isn't how i remember that character

Yeah, the only thing I can think of is that Spidey was SO distracted by the "return" of Gwen Stacy that a junior varsity dude like the Tarantula gave him more grief than he should have. Why he continued to have problems in the future... maybe the Tarantula had just gotten into his head after Spidey had so many problems in their initial encounters?

There was the DC villain Kobra(that's how they spelled it),who had his own book for a while in the seventies.

From what I have seen, everytime that Tarantula "won" it was because Spides got distracted or Tranty ran away before the fight was truely over.

Yeah, Aaron... I remembered Kobra... he's still out there last I checked. But I didn't count him because of the way he spelled his name.

Tarantula still came off better than Man-Mountain Marko. In his first appearance Romita draws him as an average big guy with no powers, who gives Spidey a rough time. By next issue, I surmise Stan reminded Romita as to how really strong Spidey was. Therein, the hero lifts Marko with one hand and uses the same "I was distracted by other stuff" excuse for not having flattened the villain right off.

Yeah, MMM was pretty inconsistent. He gave Luke Cage a tough time back in the Power Man/Iron Fist series, which I found hard to believe... even if pounding on Luke DID break his hand.

If I remember the Luke Cage/Marko fight correctly, Marko was getting his butt kicked until he grabbed some power cables and electrocuted Cage. Not a fair win.