Hey!  Snatcher-Bodies is the Webcomic of the Month at the ICCW Network.  Are you keeping up with the coolness?
I'm still heady at getting my official "No Prize" status from Gerry Conway, so I'm going to veer off a bit and dig into some Golden Age Superman.  The Amazing Spider-Man issues are great fun, but they've aged pretty well and aren't giving me a lot of fodder for the blog.  So, I'll keep plowing through them and popping stuff in as I come across it.  But I'll keep things moving along with the guaranteed Gold Mine of Snark that is Action Comics.
And there's no better place to start than the very first ish, full of trivia and silliness.  F'rinstance:

Yup.  Originally, Clark was raised in an orphanage, not by the Kents!
And, o'course, most of us know that he had limitations to flight and invulnerability at first: 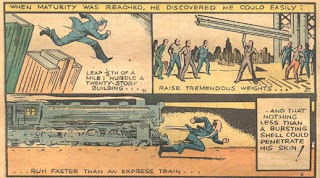 ... which is something they probably should have gone with, because the character became ridiculously powerful and impossible to make interesting.
But you may not have known that in Metropolis, if your husband is beating you.... 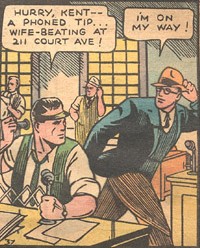 ... the neighbors apparently call the media before they call the cops.  Which only makes sense.  What point is there to committing a crime if the police are just going to break it up before the community can enjoy the entertainment value?
So, Clark goes to the scene... 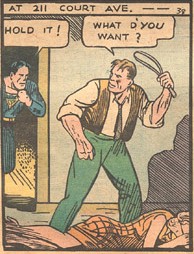 ... and doesn't bother getting out of his street clothes until he's standing in the guy's doorway.  I guess being a true orphan, Clark didn't worry a whole heck of a lot about the whole "secret identity" thing.
I ask you, what's a hero without a bitchy woman in his life? 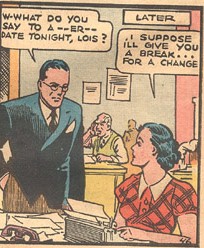 Wow.  I shudder to think how many impressionable boys were reading this and thought this was how women were supposed to treat them.  Seriously, Clark, you need to move on.  Metropolis is a big town, and there are a bunch of other women in it.
So, we're all familiar with the cover of the issue, but did you know who that oft-spoofed guy is running away with his head in his hands?  Why, it's Butch Mason, Ladies Man and Local Hooligan: You didn't even realize that wasn't just some random bystander, did you?  See?  Even though Superman bores me silly, I'm here to be a source of information.  It's but one of many services I provide you little nerdlingers.  Eisner Award Committee, take note.
See you Monday!
Posted by Adam Barnett at 12:39 AM

"Wow. I shudder to think how many impressionable boys were reading this and thought this was how women were supposed to treat them."

Considering all the "Marriage to Lois Lane/Vicki Vale/etc is Worse Than Death" stories done in the 40s and 50s, it's suprising we didn't end up with a generation of disgruntled divorcees!

Just to be persnickety, I'd amend your statement to say, "this was how women were *likely* to treat them"-- at least, if the readers were beta-males like Clark and were trying to get it on with the alpha-female (which Lois clearly is).

The sociopolitical games of high school probably would have confirmed for those readers the reality of Clark's situation, so ya cant's blame Superman for the divorce rate!

I've read this story and I totally missed that guy's name is Butch Mason! Thanks!