The Best "Out of Context Dialogue" Ever? Plus, Another Awesome Origin! 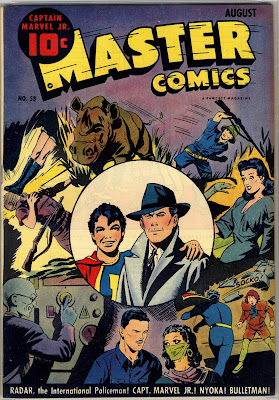 Man, they just aren't going to call it quits on Radar, are they?  Poor CMJ... he's clearly the star of the book but there he is, standing behind Radar to try and get him a little attention.  CMJ... always willing to take one for the team.

I don't say much about Radar stories (although I read them) because not much happens.  For example, here was the big reveal in this issue's story: 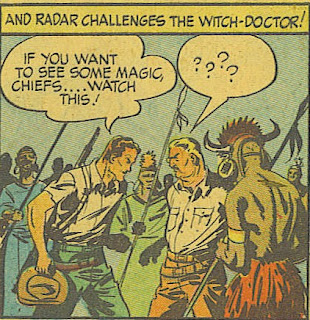 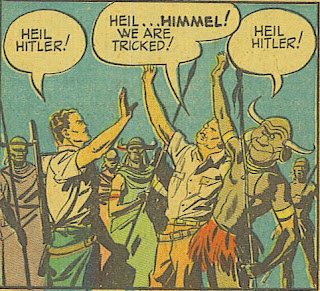 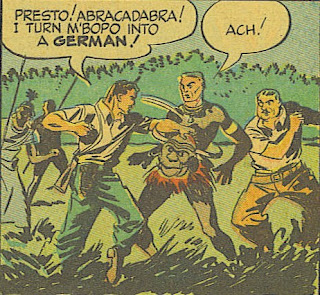 Wow... thank goodness Nazis working undercover can't resist the urge to return the salute.  That's like how undercover cops have to tell you that they're cops if you ask them.

DISCLAIMER: You know that last part was a joke, right?  Totally was.

Anyway, they may be trying to make Radar more interesting by expanding "the Organization." 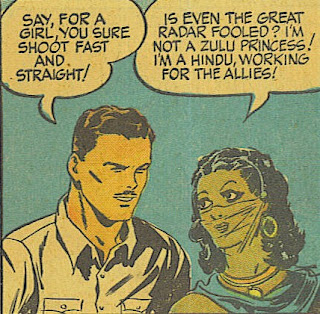 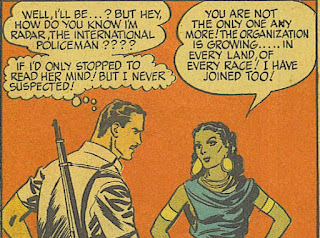 Okay, (A) The fact that he refers to himself as "Radar, the International Policeman" connotes a lot of personal insecurity that I imagine the lady finds very unattractive.  Don't overplay your hand, fellas!

And, (B) Radar can read minds?  I had completely forgotten he had any power at all, other than his powers of super-chauvinism: 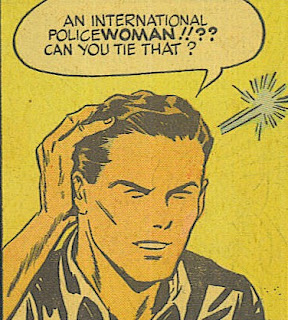 Enough of him.  On to Nyoka, the Jungle Girl!  I'm not sure why she's called "the Jungle Girl" when she's clearly glamping her way through her jungle travels.  Maybe that's just how she markets herself.

I appear to be on a tangent.  Let's break it with some Fun with Out of Context Dialogue (tm!): 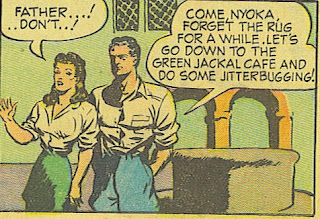 Ah!  There we go!  This has been Fun with Out of Context Dialogue! (tm!) 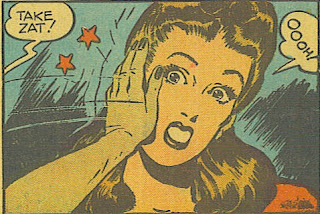 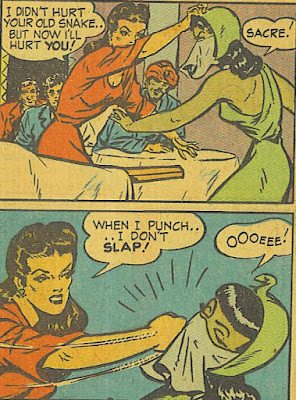 Whoops!  False start!  She swerved on me.

I've talked about Mary Marvel's unremarkable dress before, but we never saw the awesome origin! We're all about keeping a complete comics history here at CMNS.  You're welcome!

Whew!  And we haven't even reached the CMJ or Bulletman stories yet!  This issue was a gold mine of.... well, it really hasn't been too much so far, but the "slimy thing" dialogue alone was worth the price of admission wasn't it?

Do good things, my darlings!

One cannot but hope that the old snake isn't afraid of the slimy thing.

I wonder how many male readers sent for a Mary Marvel dress?