Before we launch into Golden Age Batman #10, let's savor a Moment... of Comic Book Greatness (tm!), courtesy of ish #9:

This has been a CMNS Moment... of Comic Book Greatness! (tm)

And now for a Random Spanking! (tm!): 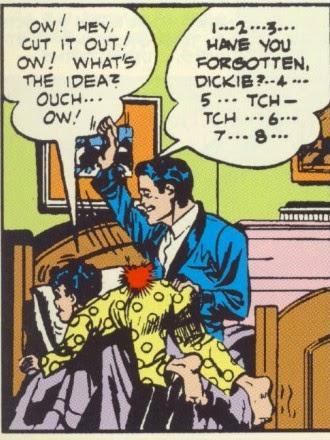 You can never have to many Random Spanking (tm!) panels in a blog.  You just can't. 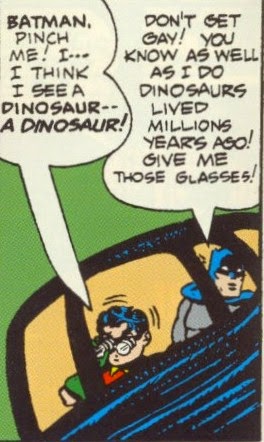 WHAT THE?  I swear to you, I didn't doctor that panel.  I also looked up the word "gay" to see if I could reconcile it.  I guess he's just telling Robin not to get too excited, but that's an odd word choice given the definitions of the word.

Seriously, don't ever use words that designate a group of people in a negative way.  That includes "gay," "retarded," and "lame."  Personally, I have used the word "lame" until recently because I was ignorant.... and Beloved uses a cane.  How stupid am I?  But it's never too late to change for the better.

Now would be a good time to see Batman and Robin fighting said dinosaur: 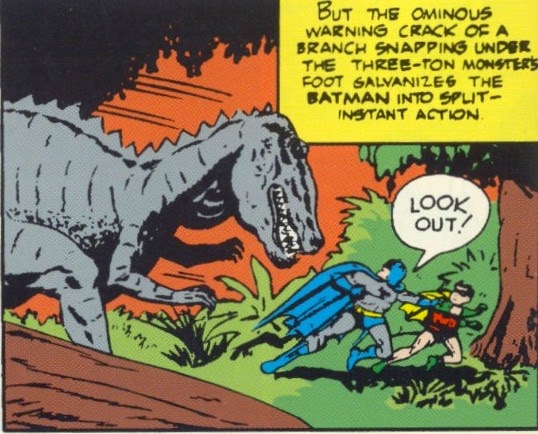 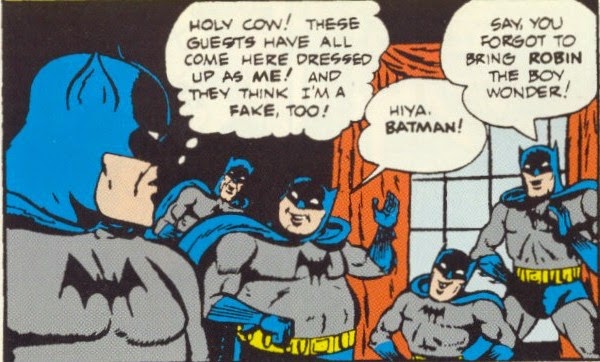 Batman's first trip to ComicCon was his last. 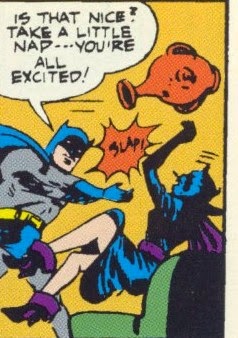 And before you get too worked up, Catwoman is still wearing that cat head helmet from the early days, so I doubt it led to much in the way of pain.  Besides, Catwoman can take all that and then some, because she's the effin' Catwoman.

It's just a guess, but I think that one connotation of "gay" back then could be "silly." At least that seems like the connotation when some character says, "Don't get gay with me!"

However, there are a couple of film-titles-- THE GAY DIVORCEE and THE GAY FALCON-- where it simply seems to mean "light-hearted." In my experience of films in this period, only Cary Grant's use of the word in BRINGING UP BABY seems to really mean "homosexual."

Exactly! I've always understood it to mean carefree and lighthearted. Bats seemed to be using it in a very unfriendly fashion there.

According to my Complete Oxford Dictionary, one of the meanings for 'gay' (now largely fallen out of use, although it survives in the phrase 'gay indifference') was airy or offhand.

In other words, Batman was telling him not to be flippant.

Fair enough, Unknown... but it still seems kind of odd. I could understand him telling Robin not to be foolish or silly...