If the Fool Outwits You, What Does that Say About YOU?

So, The Lone Ranger is taking a beating from the critics and at the box office?  I generally don't see movies at the theater, so it'll be a while before I can weigh in.  But since I usually don't invest more than a rental (as opposed to however much tickets are these days), my standards aren't that high.

It's the usual mess, I suppose, of trying to bring in new viewers without losing old fans.  I was never a huge Lone Ranger guy, but I did have the action figures.  It had a removable mask, gun... the works!  They even had horses they could ride.  Awesome.

But as far as the story goes, I'm not a die-hard follower, so who knows?  I normally would have said, "They should have made a Jonah Hex movie" because Jonah Hex is the most awesome Western character ever, but we all know how that turned out.  Still, I wonder if Disney is going to back off the action flicks a bit, what with them still paying off John Carter debts...

I'm happy to announce that I'm finished with my Fantomah supply.  It never went back to the jungle stuff, as far as I can tell.  But it did have this moment: 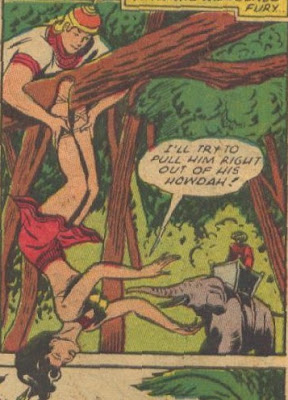 (A) I see she has one of those magic skirts that doesn't succumb to the law of gravity and (B) that guy is totally trying to look down her skirt.  Or would that still be up her skirt, even if she's inverted?  I admit, I'm perplexed.

I won't miss Fantomah very much.  The "Daughter of Pharoahs" stories generally consisted of generic Ben Hur - style epic battles with events like this: 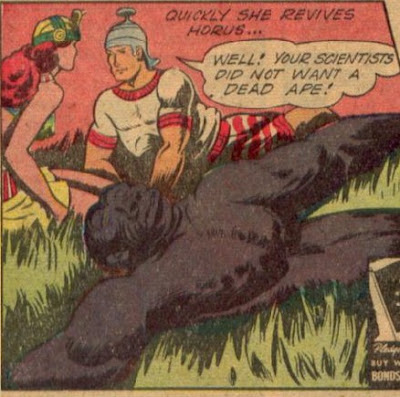 Fair enough.  Why would her scientists want a dead ape?

But to cleanse our mental palate, let's check out this bit from Superman Family #169, courtesy of Robert Gillis:

That's not quite a Disembodied Floating Head (tm!), because Jimmy's head is technically attached to the rest of him, but that is one nightmarish vision, to be sure.  Thanks, Robert!

"outraged schemers"!! I just can't get enough Superman and Superman Family. It's hilarious enough without commentary, and it's even more funny with.

Yeah, Robert is taking one for the team there. I don't think I could handle Superman Family... although plowing through all those Fantomah stories makes me wonder if I'm not giving myself credit for how much I can endure....

You really have to be serious about what you do to devote yourself to so much Fantomah. Although, there definitely were some worthwhile gems there!