Fear the Rug of Mr. America!

It occurred to me that before I went on hiatus, I was going through my limited supply of Action Comics.  It's limited because... well, because Superman is an embarrassment to comics and I didn't try very hard to collect them.  But I'll add what I have to the rotation and see if I can locate folks who have copies they'd be willing to let me borrow.  You'd be amazed how boring this blog would be if it weren't for the generosity of my fellow comic nerds.

Anyway, I picked things back up with Action Comics # 42 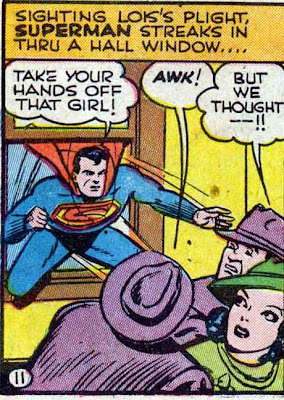 This was back in the day before Superman could actually fly.

And he'd kill you. 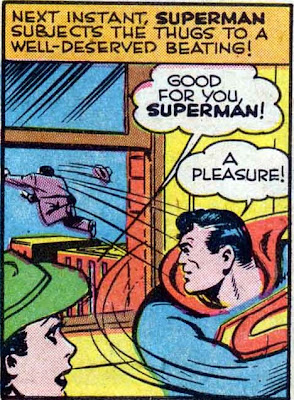 A well-deserved beating apparently also involves falling to your death.  Supes didn't clown around back in the day.  It's a shame he reigned it in, because the Punisher has nothing on early Superman.

To make sure Superham wasn't the lamest character in Action Comics, they insisted on putting in a story with Mr. America.

I think Mr. America is one of the least successful DC reboots.  DC has done an amazing job with some really questionable properties over the years, but ... well, mustache aside, he wears a sash: 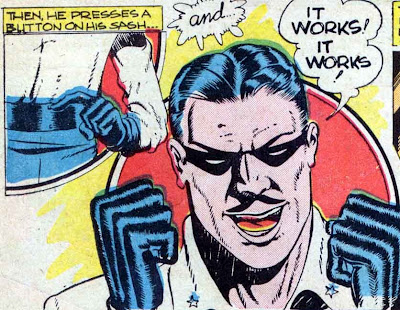 There's probably a certain kind of ... ahem... device joke to be made here, but I'm taking the high road and continuing.  Because what actually happened is just as cringeworthy.

You see, the man made himself a magic carpet. 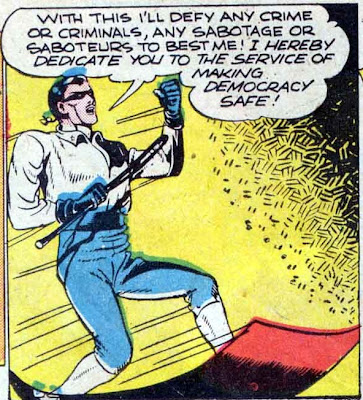 Yes, the mustache, the ponytail, the knickers and the whip weren't groan-inducing enough, he had to go an make himself a magic carpet.  Yikes.  It's technically a rug, I think, but "magic rug" sounds even worse.

And he needed a foe (and "Baldy" was already taken by the Golden Age Green Lantern), so we have the Queen Bee.  No, not that Queen Bee.  This one: 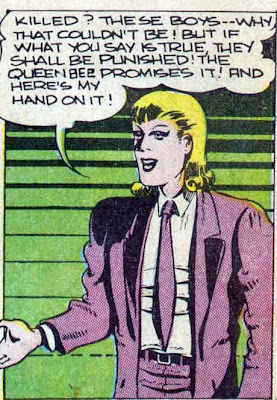 Okay, how did this feature end up not getting its own chapter in Seduction of the Innocent? 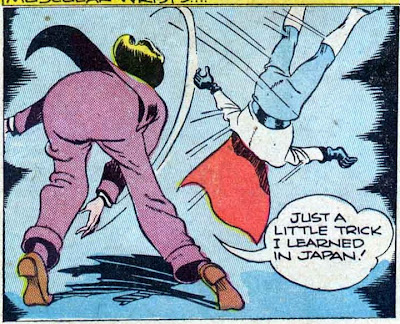 Yup... anyone who smacks around Mr. America has a seat at my proverbial table any time.

Here's an ad I found that was kind of a head-scratcher: 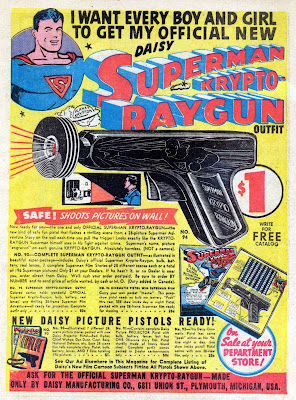 "Like the one Superman uses"?  I realize there are many holes in my Superham collection, but I wasn't aware Clark was packing a piece.  Anyway, this is what it looked like.... 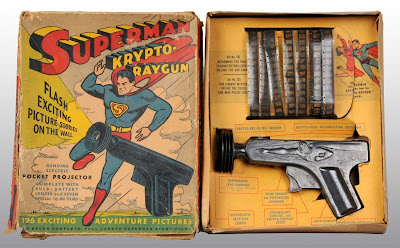 Kinda cool. I certainly would have wanted one. I had this Star Trek phaser that was just a flashlight that made phaser noises and I thought it was awesome:

I somehow talked my mom into dropping five bucks for that in 1975.  According to an Inflation Calculator, that's like $22.00 in today's currency.  I couldn't believe she did it.

I woke up really early, all excited the next morning, and couldn't help but use it.  It woke her up and she took it from me until everyone in the house was out of bed.  That was a bitchin' toy.

Meanwhile, that Superman raygun will run you around a thousand bucks these days if you can find one.  Wow!  Not bad for a replica of something I'm not convinced Superham even used.

The Golden Age heroes were often ruthless killers. Probably reflects the greater tolerance for third degree police methods and lynching back then.

I've wanted one of those Krypto-Rayguns ever since I saw the ad for one in the Famous First Edition reprint of All-Star Comics #3 as a small child back in the 70s.