Well, that is an unfortunate handle.  Seriously, don't give your kids a name that is a pun.  Life is hard enough.

Slap her back, Pete.  No jury would ever convict you. 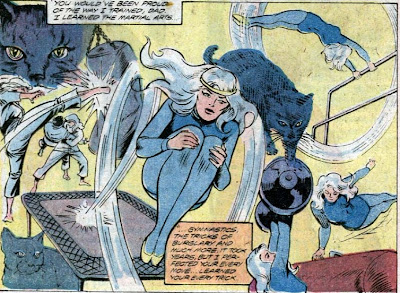 Apparently she "trained for years" wearing the same blue leotard.

I presume the cat is there for symbolism only, because most cats aren't interested in you enough to watch you do stuff unless you're using a can opener.

Not that I have anything against cats.  I love cats, but they tend to do their own thing.

Anyway, it even has FUN WITH OUT OF CONTEXT DIALOGUE! (tm!)

And finally, the OFF-CAMERA DEATH! (tm!):

I admit I fell for that last one.  I was pretty young when I read this the first time, and I naively thought they were being awesome by just having May pass away off-camera.  Of course, now I realize that there was no way they were going to end the never-ending "Poor Aunt May's Weak Heart!" storyline, but it would have been awesome had they really gone that way.

At the time that comic came out, I wasn't buying Spidey regularly but was keeping rough track of events through secondhand purchases. Somehow I happened to find out that this issue spotlighted Aunt May's offpanel death so I bought it. I was pissed when it wasn't real and never bought another new Spidey issue.

Yeah, I really thought they had done it. I was such a rube. I still hadn't figured out that death is rarely fatal in comics. Even the term "Bucky dead" has lost it's power...

To think that Peter Parker actually died before Aunt May. How many heart attacks did she have? That old biddy is harder to kill than a cockroach.

Odd names. I knew a girl, her last name was Young, her dad's name was Joe.