The Words "Prostrate" and "Prostate" are Way Too Similar Wednesday

Still on All-Flash Quarterly #1.  Jay needed all those pages to finally realize he was putting Joan's life at risk. 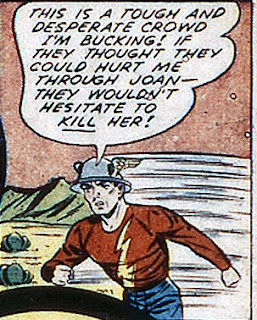 Gee, Jay... ya think?  I'd say the horse is already out of the barn on that one.  And I don't think you can consider everything all sunshine and sausages once this particular case has concluded.  I suspect everyone this side of Vandal Savage is going to take a shot at Joan if they're paying any kind of attention.

Every once in a blue moon, I stumble upon a character I've never heard of in my forty-plus years of comic nerdlingerdom.  "Butch McLobster" is just such a character:

I spared you the rest of the two page strip because it was pretty lame.  But that's a bitchin' name Butch McLobster has there.  If DC revives him, you'll know where they got the idea.

You know what another great name for a character would be?  The Prostrate Cowboy: 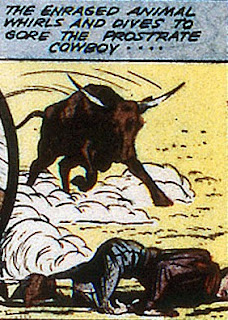 Okay, I'm finished with that now.

Another thing that I enjoy about rifling through really old comics is the window into the time in which they were published.  For example, I've never heard this expression before: 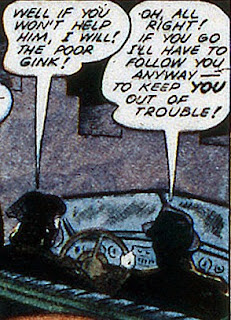 I admit, I've no idea what a "gink" is.  I'm a little afraid to Google it.  I Googled an expression I had never heard and it turned out to be a racial slur.  I felt like a creep for Googling it, so I'm just going to hope for the best with this one.

Hey!  It's time for Fun with Out of Context Dialogue! (tm!) 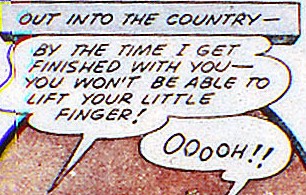 Okay, I'm going to pull back on the camera a little.  You've had the chuckle already, so look at the whole thing: 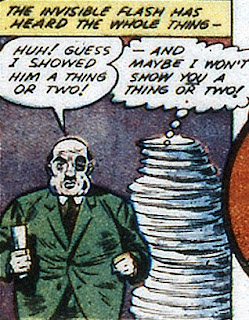 The Golden Age Flash had some kind of "invisibility" setting that he used a lot, and I'm just having a hard time with it.  I mean, he looks like he's a miniature tornado there.  Seriously, the guy has no idea that something whirling around next to him?  Shenanigans!

But don't mess with the Flash.  He will take you down, my friend.  Like out of the picture.  And he'll make it look like natural causes: 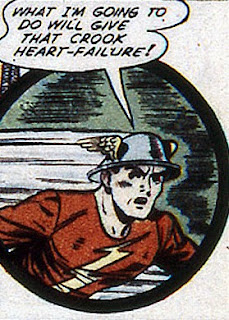 If nothing else, "Gink" sounds like a cross between two other racial slurs. That alone probably makes it suspect.

Butch McLobster kind of reminds me of Popeye. It's the chin, I guess.

I did a quick search and Merriam-Webster dictionary says that gink is a slang term for person or guy.

Now you have me thinking about fink. I wonder if fink came from gink. Granted, you're not a nice guy, you're a fink, doesn't have much logic to it.

It's the "oooh" combined with the little finger lifting that makes that whole panel so fabulous.