Cigarettes Made Me a Super-Hero Monday!

Let's celebrate our first day back (after almost 18 months!) with a comics celebration: The Golden Age Flash getting kicked out of the Justice Society: 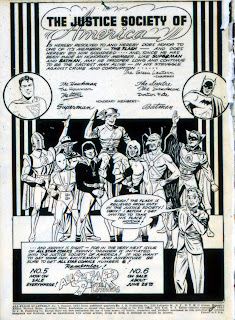 Yeah, I know... he's an "Honorary Member."  But when they go to that much trouble to memorialize your new status, they've probably already changed the locks at the old Justice Society HQ.

And he was replaced by Johnny Thunder, which gives you an idea of how much they valued his position.  Nothing says "we'll never be able to fill your shoes" like giving your slot to the comic relief.

Although I kinda like Johnny Thunder.  He had a cool name and he used phrases like "HOTCHA!"  That's a phrase that needs a comeback if ever there was one.

All-Flash Quarterly #1 is where we find ourselves checking out this handy origin: 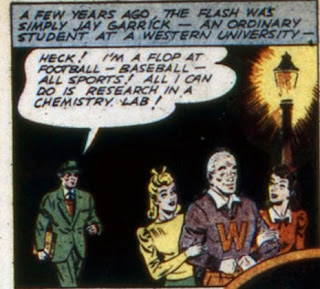 Wow, how old is that guy with the girls?  I mean, I started going gray in my twenties, but that guy is a hard 45 years old if he's a day.  I've never been much of a sports guy, either, but if Jay can't hold his own against guys twice his age, I can see why the chicks don't dig him.

Anyway, Jay spends his time in a lab, which is a good place to be if you're hoping to get super-powers.  Or radiation poisoning like Madame Curie.

I don't know what "hard water" is, but seeing old Jay light up there gives me a clue as to why he can't keep up with elderly men in competitive sporting events. 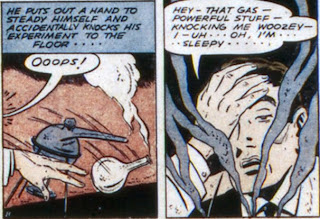 Clumsiness: It's the #2 cause of getting super-powers, right behind getting bathed in radiation and not growing a second penis.

Yes, it's my first post back, and I've already used the word "penis."  I'm a little concerned about our prospects for future posts.  Oh, well.  Hi, Googlers!

Anyway, Jay feels swell and can't understand why he can't leave the hospital: 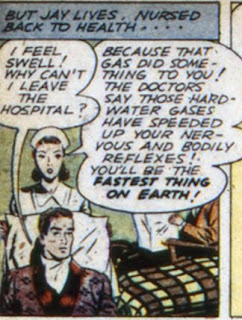 Mental Note: The nurse knows too much.  I must silence her lips forever. 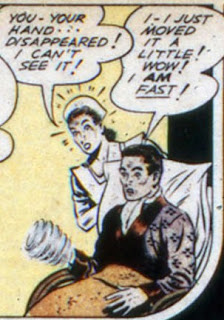 Hmmmm... that hand vibrates really quickly, all right.Well, at least he's eliminated the need for a girlfriend now.

I'm so sorry.  I felt pressured to keep the Googlers who had Googled the word "penis" entertained.

Jay goes and bugs a police sergeant about "criminal sections of the city."  Because, you know, a police scanner and the ability to run anywhere within the city limits in the blink of an eye wouldn't give you enough of a jump on things: 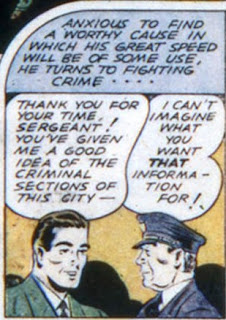 Mental Note: The officer knows too much.  I must silence his lips forever.

And Jay slaps together a pretty sad excuse for a costume, even by Golden Age standards: 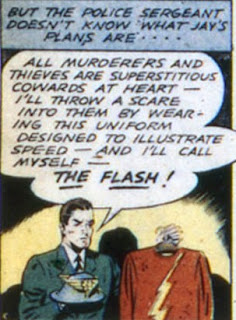 I'm actually being too hard on it.  Sure, it looks like he sewed a lightning bolt to a sweater, threw on a pair of jeans and attached wings to a hubcap.  But the Golden Age Flash is one of the most iconic figures in comics.  He's instantly recognizable, due in no small part to the fact that he's gone 70 years without a single costume change.  Not even Batman or Superman can claim that.

Hey!  Jay has a girlfriend? 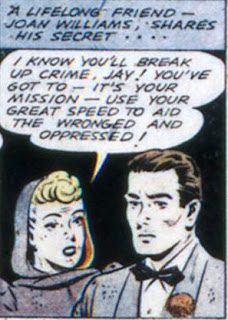 Hmmmm... I'll bet Jay was in the Friendzone until he told Joan he had super-powers.  That's really the only reason you'd rat yourself out like that.

And look at the expression on Jay's face.  Sure, I'll use it to aid the wronged... but I've also got this thing with my hand I can do now that you're REALLY gonna love!

Again, my apologies for that last bit, but it really went well with the previous joke about his hand moving really quickly and I felt committed. 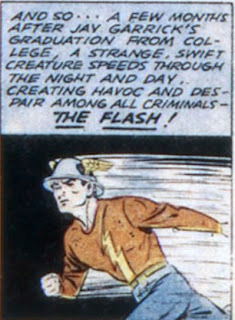 Wait. A. Minute.  The guy waited until a few months after he graduated college??  How long was THAT?  How many crimes did he fail to prevent during that time?  Yeah, I think everyone should make the most out of their college years, but there's got to be some kind of Karmic payback when the Rag Doll pillages and plunders while you're getting 'faced at keggers.  I'm just saying.

This is *Chris Treager voice* literally my first time visiting this site, and I feel blessed that it's your first post back.

I used to visit this site daily, and then, for over a year, nothing! It was the Sue storm 'Oxygen in water' post that got me hooked. It feels so good to have you back!
No homo.

Great to have you back! I've missed this site.

For the record, I like Jay's Flash outfit better than the modern ones (although it always looked to me as if it were made out of flannel).

No comments on Jay's stealing Bruce Wayne's insights into the criminal mind? Interesting how their minds work differently- Bruce figured criminals would be scared by a large monstrous bat stalking them, Jay figured a costume inspired by Reddi Kilowatt would do the trick.

Oh Adam, I missed you. And here you are blogging about Jay Garrick, who is my FAVORITE Flash.

Seriously, they replaced him with Johnny Thunder? It is to laugh.

I am glad you are back, mang.