The End of the Super Sons Thursday!

I realized this morning that I have totally left you hanging on the fate of Superman Jr. and Batman Jr. I guess I was too distracted by Nature Boy.

Anyway, you may recall that Superman Jr. and Batman Jr. were the "Super Sons" tales written by Bob "I'll Write Whatever I Dang Well Please" Haney. In July of 1975, World's Finest #231 was the last appearance of the Super Sons for a half decade, and no one seemed to notice or care.

Now remember, Bob Haney and the powers that be at the time were hardcore that the Super Son stories weren't "imaginary," meaning they were meant to be a part of the DC Universe, albeit taking place at some time in the future where people would still inexplicably wear bell-bottoms and adults would say 60's slang.

Fast forward five years to World's Finest #263. Five years have passed, and I guess someone realized that no one ever really resolved the whole Super Sons thing. Along comes the usually-talented Denny O'Neil to wrap up the loose ends. Thusly: 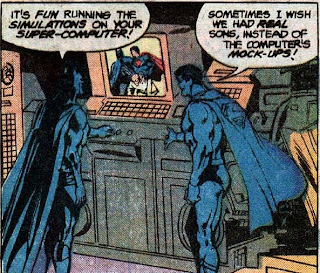 So anyway, the Super Sons escape the computer and become "real" because Superman is throwing away some radioactive waste while the computer is running the simulation. It's like running the dishwasher and the garbage disposal at the same time - it's just never a good idea.

Anyhoo, Superman and Batman round the boys up and confront them with their imaginary (but not IMAGINARY) status. 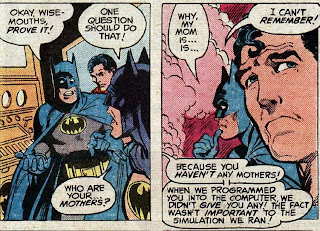 That was actually kind of slick, because in the real but not real but not imaginary because it was part of a real imaginary simulation in the DC Universe stories, the mothers of the Super Sons were never seen.

Let's say you're Denny O'Neil, and you've inherited this mess. What do you do?

Well, like the rest of us, O'Neil just had them throw themselves into a disintegration pit: 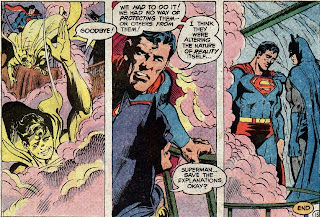 Which I found extra funny because you know that by the time he was through writing his way around the Bob Haney madness, O'Neil was resisting the urge to have Superman take a super-whiz on their ashes. We all have those moments.

Farewell, Super Sons! I have no idea what the word "imaginary" means in the DC Universe any longer. That's probably why they started using the term "Elseworlds" for stories that aren't part of the big DC Universe scheme of things.

I never had a Stretch Armstrong because the idea of just pulling on a gel-filled rubber doll didn't have a lot of entertainment value to me. Neither did these: 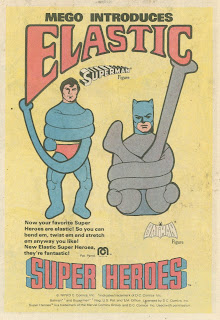 Do these things look even slightly fun to you? I turned up my young nerdlinger nose at these things. Yet, had they made a Plastic Man or Ralph Dibney version, I shudder to think of the lengths I would have gone to get my mitts on one.

See you tomorrow!
Posted by Adam Barnett at 12:35 AM

Thanks for clearing up what happened to the Super-Sons.

(Though, them being copyrighted characters and in a sense "immortal", I suppose we'll never be 100% sure someone won't "re-simulate" them in the future...)

Man, that's cold. "You're not really alive...into the pit with you!" I love it when Superman is being obnoxious.

Why DIDN'T they make stretchable Ralph's and Plastic Man's anyway?

You should read the original Bizarro comic strip tale (by Alvin Schwarz I think) for total Superman dickishness. Basically, the moment Superdude sees a freakish double of himself, he wants that unliving thing dead and gone.

Hate to say it, but Mego did do Plastic Man. The wonderful Mego Museum has more: http://www.megomuseum.com/heroes/elastic/index.html

Aquadcd.... Why, they sure did! I can't believe I don't have one of those, even if Plastic Man *is* wearing a really odd-looking vest!