If you haven't gone to Google to see the logo that's up today for the San Diego Comic-Con, check it out!

Meanwhile, back in WWII: 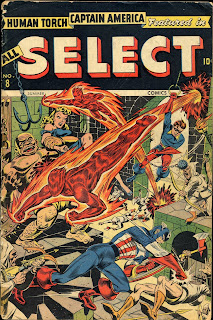 I've determined once again that I'd rather fight Captain America than his sidekick. You may get a shield upside the head, but Bucky will put a mace across your face. That kid's mean.

I'm not sure how mean his foes were, though: 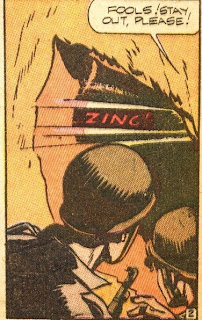 Yes, they were evil Japanese. But they were polite, even while trying to blow your brains out.

Say, Bucky, with Microsoft coming out with a new search engine, what site will you use? 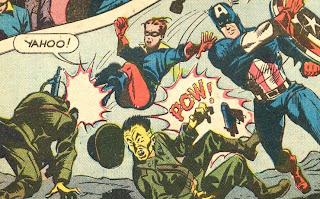 I think Microsoft was hoping the answer would be "Bing," but I've used it and I don't see the difference.

Now here's some Japanese I was expecting to see: 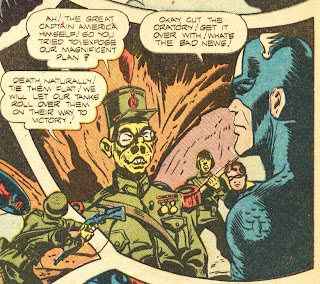 We could just shoot you, which would be a whole lot more reliable, but since I am yellow, buck-toothed and have a really misshapen head, we will devise a simple deathtrap from which you can easily escape! Fear the Axis!

Cap? Have you tried Microsoft's new search engine? Which one will you be using these days? 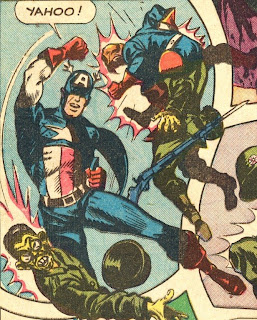 Yeah, I feel the same way.

See you Monday!
Posted by Adam Barnett at 1:30 PM

Is...is Bucky sitting on that man's head while he beats him to death?

I feel that there is something innately wrong with saying "yahoo" while knocking someone unconscious. Kinda makes you wonder if superheroes take the job to protect people or just to beat the crap out of them.

Then again, "GOOGLE!" doesn't have quite the same ring when it comes to war cries, so maybe we can forgive him.

I apologize for never writing before. I love your blog!

I just had to comment on that torch cover. Aside from badass Bucky being badass, did anyone notice that the Torch just totally eviscerated that guy with his flamey fist of death? Blood spurt is evident as the guy looks in horror at his own organs.