Egad, if it's been a month, can I even say I have a blog?

Thanks to everyone for their patience and well-wishes.  We're coming along. Beloved continues her surgerypalooza tour and I've got work obligations at bay enough that I hope I can post more frequently for a while.  But here's a veritable cornucopia of goodness courtesy of contributor Robert Gillis! 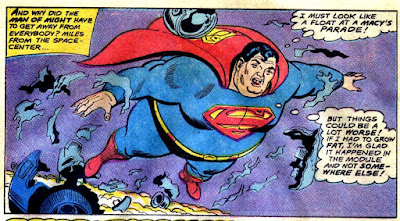 Next issue: Oprah sits down with a newly-slimmed-down Superman and discusses her love of bread.  This is why DC does reboots every other month. 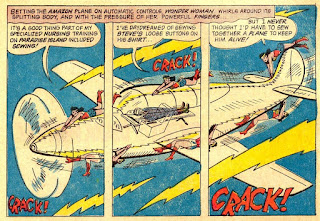 Wonder Woman: The pinnacle of female empowerment... who daydreams of sewing buttons on her man's shirts. 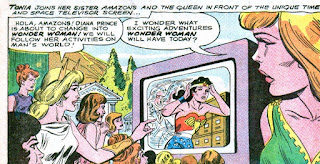 Finally, a look at the most pointless sidekick ever, the Justice League's Snapper Carr: 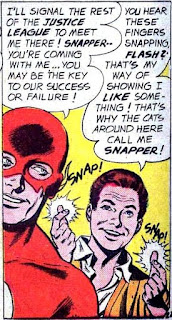 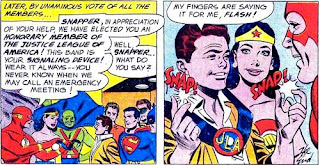 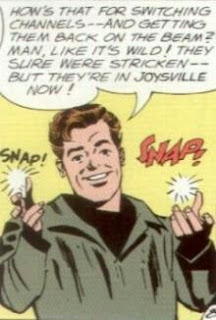 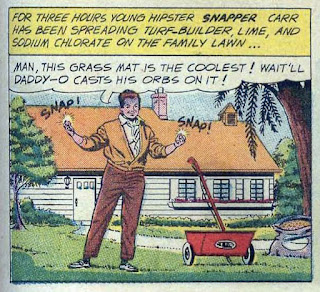 You know... it's easy to forget how awful a character Snapper Carr was.  He was originally meant to be a knockoff of a character from a character called "Kookie" from the tv show 77 Sunset Strip.

The idea was that teen culture was emerging into the mainstream and the Powers That Be wanted a typical, "hip" teenager around.  Snapper varied widely in personality over the years: At first, he would speak primarily as you see above.  Over time, he dropped the slang and was as lacking in character as much as the other members of the League at the time.  The only thing he ever did that was interesting in the League was betray them.

Yeah, they kept bring Snapper back over the years.  He had his own team called The Blasters that was as successful as we all would have expected.  And for some reason, he was brought into both the Hourman and Young Justice series as well as a role in Final Crisis. But seriously... it's been 50 years.  They've managed to make some old characters quite awesome over the years, but this guy will never be one of 'em.

See you all soon!

Don't forget he was Star-Tsar or something like that, in the 70s when the JLA comic was bigger at 60 cents.

And I always wondered if Snapper as Kookie was just a little too late, the way Archie started wearing peace medallions around 1990. (Well, OK, no.) I thought of him more as a weird Dobie Gillis type. Maybe because DC owned the comic rights.

I have a mild affection for Snapper just because he appeared in various stories I liked, but I never had any illusions that he was interesting on his own. His appearance in those Englehart stories, as Wayne mentions, are probably the height of his career. I assume DC keeps bringing him back out of some mild affection like my own.

Strangely, the name is now being used on the SUPERGIRL tv show for the character of a newspaper editor, who has no points in common with the original character that I can see.

Snapper also appeared in the Justice League pilot as a TV reporter voiced by Jason Marsden, and I believe he also appeared on the TV Young Justice as a teacher. Jerome Moore has a model sheet of him on his deviantart blog. First time I've been to the blog, but it makes me appreciate when comics make no sense which is 90% of the time. :)