A Superman Calendar that Will Work Again in 2040! 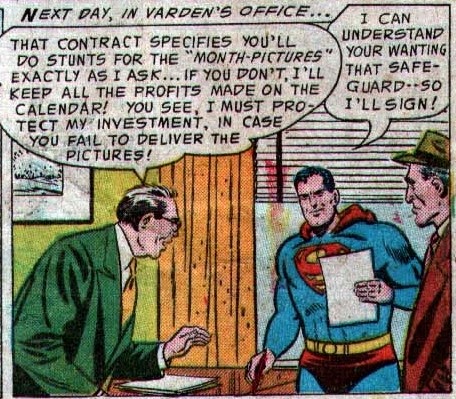 "Um... it's just slang for washing dishes at a Mexican restaurant."

This story was actually somewhat clever in that it devoted two pages to an actual Superman calendar for 1956.  It showed Superman doing things based on the month, like this one:

Why is he stealing a school from children?  That seems rather mean-spirited, depending on how a given child felt about his long-term educational prospects.

And here's one from December:

I can't legally say this until a judge or a jury convicts him, but it looks to me like Superman just robbed Santa Claus.  I'll wait until the verdict comes in, but...

Anyway, the challenge was for Supes to do these "events" and get photographed.  Or else what, you may ask?  Well: 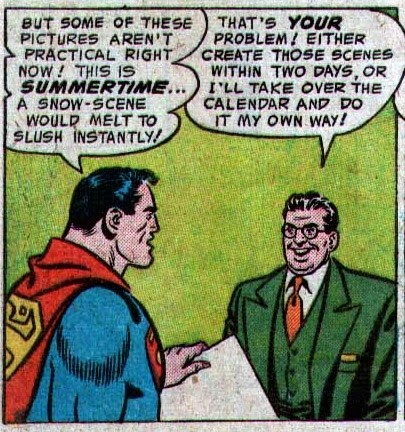 "Let's not worry about that right now, Superman.  Let's just say there will be rubber bands, peanut butter and hamsters involved."

So Superman could just fly to somewhere where there is snow. He has the entire world. It is only summer in one hemisphere. I don't see the problem.

Thank you, Jerry! And best wishes to yours!

Good point, Marv! Superman tends to get artificially challenged at times to make a story work, to be sure.