You MUST Award Me Every Doctor's Degree You Have, Because I'm Superman! Tuesday!

So, here's a little something I found in Lois Lane Annual #1.  Again, I'm sure it's a reprint, but I have not idea at this point where the story came from. 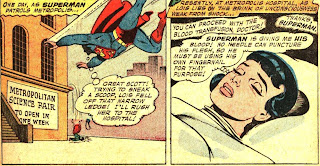 Yup!  Yet another head injury!  That woman should just wear a helmet all the time.  And I mean all the time.  In the shower, at the office, reading the newspaper.... this woman needs to have her skull protected constantly.  Law of Averages be danged, this woman is clearly going to have her bell rung if there's any bell-ringing to be done, so she should always be prepared.

Anyway, Lois dreams that Superman gives her a blood transfusion.  I presume that she has some kind of blood fetish where this is the ultimate intimacy or something.

Well, of course giving someone your blood would give them the ability to do anything you can do.  That's how DNA works.  Anyone who knows the origin of the She-Hulk (which is exactly the same thing) knows that.

Although the She-Hulk's origin makes some weird kind of sense, since she was given irradiated blood.  It seems like Lois would suffer a severe hemolytic reaction here.  Good thing it's only a dream.  What happens to Lois in her real life is much more rational.

So, what does Lois do?  You know the answer!  She does what anyone who finds themselves with a freaky ability does: 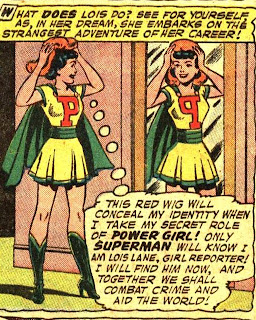 Her secret role as Power Girl!  Isn't it fun to find an earlier occurrence of a modern character's name?  And it didn't stop there... 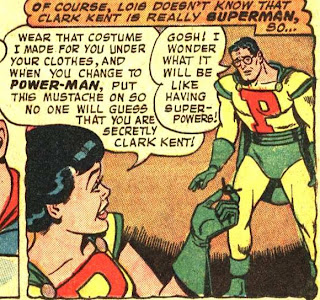 Yup!  Clark becomes Power-Man, which we all know is the super-hero name Luke Cage used before he remembered that (a) Luke Cage is an alias in and of itself (he was born Carl Lucas) and (b) Luke Cage is a much more badass name than Power Man.

And anyway, Lois dreams a bunch of stuff and then wakes up, so that story was a big waste of time.  But in the next story, she has her legs crushed.  So naturally, she became a mermaid: 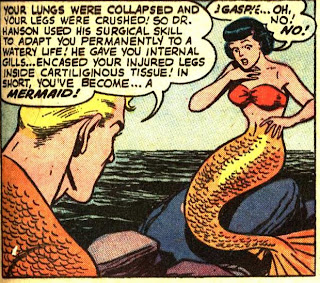 That was actually a fairly common medical practice before plastic prosthetic devices became more popular in the latter quarter of the 20th Century.  You don't see many mermaid descendants because no one could really figure out how to mate with one.

Hey!  Did you know that Superman can perform surgeries?  Of course he can! 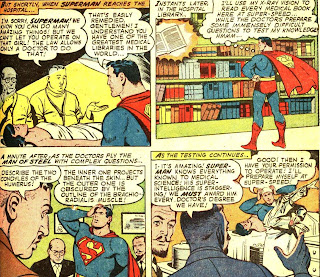 So, let's get this straight: Instead of wearing a flashy costume and beating up losers like the Prankster and the Toyman, Superman could have spent the last 60 years or so performing life-saving operations?  Is there anyone left who wonders why I don't like Superham?  I didn't think so. 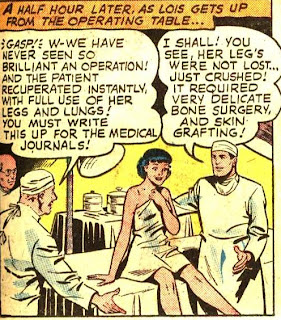 So, if Superman operates on you, your own powers of recuperation take on superhuman proportions?  Because it seems to me like Lois should be in for a good six months of physical therapy, minimum.  And frankly, Superham had to restore more than just Lois's legs and lungs, if you see where I'm going with this.... and I think you do.

Boy, those Lois Lane comics were pretty messed up, if you think about it.

You CANNOT get a medical degree by doing nothing but reading books. Did anyone ask "Hey,Superman,do you have any surgical experience?"

If Lois really wants to be Power Girl, it's going to take more than a wig, ifyouknowwhatImean.

Meanwhile Clark/Superman looks abashed when he realizes a ten-cent fake moustache would have been a much better disguise all along than some fake glasses.

I don't believe you even have to think about it to realize how messed up those comics were.