On Quiz Shows, Vulcans, and Plastic Guns that Hold Your Pencils Wednesday! 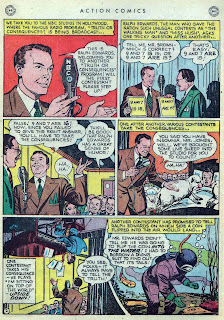 Wouldn't you watch the heck out of a show like that?  I'm surprised it went over on the radio, since actually seeing these things take place was probably a lot more fun.  And, FYI, while the show debuted on NBC Radio in 1940, it would be on television 10 years later.  And it would be the first daily game show that succeeded in syndication (as in, it did well after it left the network for twelve years).  There was an attempt to revive the show in 1987 that completely slipped past me.  It also marked the debut of Bob Barker in 1956, who would later go on to host The Price is Right and get into fistfights with Adam Sandler on Happy Gilmore.

See?  We learnt ourselves something today.  Don't let people tell you this site is a total waste of time!

And in the spirit of that, check out Lois Lane's hat!: 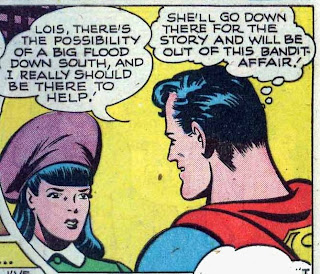 Lois, that is quite the large purple chapeau you're working there.  And you look a lot like a Vulcan.

Here's Kirstie Alley as a Vulcan:

She made it work.  I always like Kirstie Alley.

Oh, and here's some social programming for you, circa 1948: 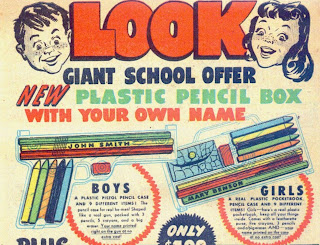 And I'm not judging here.  I don't know about you gals, but I would have been all over a pencil box shaped like a firearm.  All. Over. It.

See you tomorrow!
Posted by Adam Barnett at 12:33 AM

Good stuff as always, but I have bad news for you. I tell my friends about cool stuff all the time (like your Truth or Consequences info)...they still say I've wasted their time.

Yeah, I know people are like, "Just shaddap and put up the funny panels," but when I find out stuff that interests me, I put it on.... more for my own future reference than anything else. :-)