A Gorilla Who Strapped a Bomb to His Chest That Would Go Off if He Touched the Ground for Some Reason I Forget Tuesday! 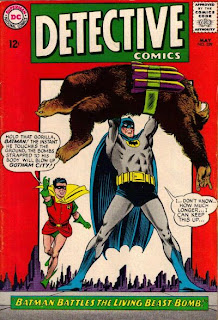 Not that the story itself was a classic, but you just had to love an era where the main plot device was Batman having to hoist a gorilla over his head lest the bomb that the gorilla strapped to himself would go off.
Of course, a gorilla weighs around 600 pounds, but he's the got-dang Batman!
Hey!  Here's Something Disturbing! (tm!) 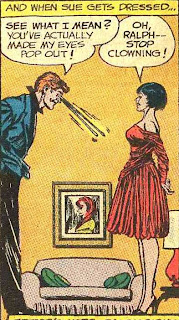 Yes, unearthing the silver age Elongated Man stories has introduced not one, but two categories here at CMNS.  I appreciate the joke, and I actually think Ralph can do this, but that's totally gross.
However, here is yet another Thing I Don't Think the Elongated Man Can Do!(tm!):

I'm no physicist, but that just doesn't seem right.
See you tomorrow!
Posted by Adam Barnett at 12:11 AM

How did the gorilla get to where it is if it can't touch the ground or the bombs will explode? Did he parchute to where he is and Batman caught him?

And again I say Elongated Man just did that so therefore he can do that. It is not like a Greg Brady moment or something. From what you have shown he does those sorts of things all the time.

Hey, it's not like Ralph's eyes weren't still attached!

If it wasn't for the Comics Code, Ralph Dibny would've been extending something else at those two crooks in the last panel!

Gotham City was sure starting to look like Central City. Check out the skyline on the cover.

I'm with Adam on this one. Even in a world of comic book science, Ralph's powers are generally shown to abide by some sort of logic. He shouldn't be able to extend a wrist bone or a knuckle, for example, at a 90 degree angle to his arm.

This Batman story was actually the basis for the Keanu Reeves/Sandra Bullock classic "Speed", which was originally going to be called "Hold That Gorilla!"

Ah, but Justin, Adam was saying that Elongated Man "can't" do that, where as you said he "shouldn't be able to" do that. BIG difference! Ralph DID do it so therefore he CAN do it. If he should be able to, as explained by the rational of his origin, is another matter entirely. BUT he is shown doing it over and over and over.