So we're a few issues into the "New Batman" Detective Comics era, and I've determined that by "more realistic," they simply mean "no aliens or space travel."  I'll concede that's an improvement, but we aren't quite at the gritty detective level I was used to when I started reading comics in the 1970's.  But I'll give them credit for this: 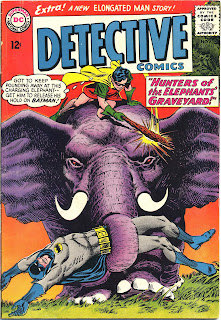 Elephants are awesome, second only to gorillas in comic book awesomeness.  To replace those goofy alien invaders with an elephant was some sound editorial judgment.  God bless you, Julie Schwartz!
Not that we didn't still have our moments: 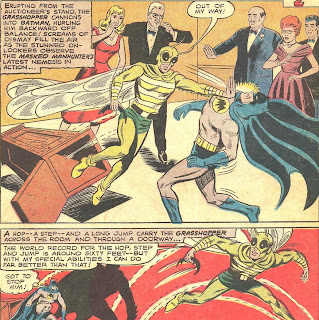 I'll admit I'm not the most careful reader, but I can't recall any reason why the two Grasshoppers had these special abilities (they were brothers and they liked to pull the "They Don't Know I'm a Twin So it Seems Like I'm in Two Places at Once" gimmick).  I'm pretty sure we weren't given any.  We're still in the Silver Age, kids!  Comics still only cost 12 cents!
Here's a weird bit of trivia: This issue of Detective Comics (#334, because I'm sure you're going to be heading to your local comic shop in droves to buy it) is the only appearance of the character.  But, and I kid you not, there was a trading card series put out by Weetabix in 1979 that actually had this character in it.  Eighteen cards with one DC character each, and they devoted one to a one-shot Batman villain fifteen years after his one-and-only appearance.
Then again, other villains used included Kung, Pywal, Ocean Monster, Robot Behmoth and Trino, so it's not like every other card was a member of the varsity.
I'm going to add this to the list of things I don't think the Elongated Man can do:

In fact, I'm establishing a new category because I'm noticing it a lot: Things I Don't Think the Elongated Man Can Do! (tm!)  I'm sure there will be more.
Hey!  This was awesome!: 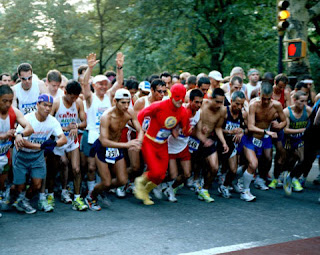 How cool is that?
See you tomorrow!
Posted by Adam Barnett at 12:20 AM

Leaving Bwana beast aside has anyone tried to cash in on a gorilla/elephant hybrid? Say call it Elerilla?

I wonder how many hours the grasshopper would have had to wait, crammed in that podium just to jump out and bop Batman on the chin. Hardly seems worth it. Must have been SOME easier way. A disguise or SOMETHIN.

Oh, also those cards, I think that comic company's just do things where they put out a characters likeness and or name every once in awhile just so that they can maintain rights to them. That might have been why alla the cards were all lame characters that hadn't appeared in years.

For those who don't know what I'm talking about: http://www.youtube.com/watch?v=r8dZI4iG_J4