Surprise Your Enemy with Tinfoil Thursday!

Like most comic book nerdlingers as a child, I drew pictures of my favorite heroes. Of course, the results were far from satisfying. Not only did the pictures never look right, it seemed as though I just pulled the concept for the image out of the air. With that in mind, these are from Detective #279: 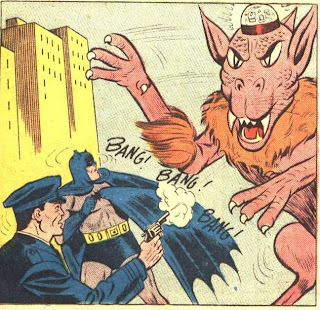 Seriously? Man, Batman went through some awful times. I'd like to forget the 50's and the early 60's as much as the next guy, but we're all about truth here, so let's forge on. 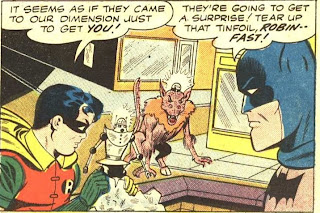 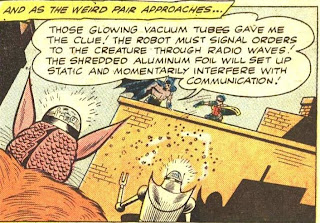 See? Turns out those foil hats do block radio waves! I'm sure you owe some guy who wanders around downtown in your area a sincere apology.

I'm not sure if the Storyville episode responsible for this trophy was ever printed. Seriously though, if you're a vigilante and trying to keep operations on the down-low, why would someone think it's a reward to give you a five-story statue? How do you get that back to the cave with any kind of discretion? And I imagine the money Batman recovered was probably less than what it cost to make the dang thing. Yeesh!

Not to mention the fact that it's a dang embarrassment. I am the dark avenger of evil, living in the shadows and striking fear into the hearts of criminals everywhere. And if you'll look to your left, you'll see my gigantic sculpture of an egg wearing pants and a top hat. 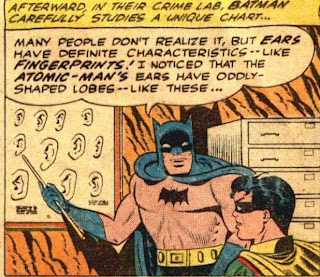 The scowl on Robin's face is quite justified. Batman covers his ears, while Robin's "uniquely identifiable characteristics" are just a'flappin' in the breeze. Being a sidekick is really not the greatest job in the world.

See you tomorrow!
Posted by Adam Barnett at 12:35 AM

Definitely one of the best I've read from you lately.

Keep on with such an awesome blog!

1) Perhaps the Weldon Gang/Storyville tale was an early version of an "Easter Egg"?
(Rimshot)

2) It looks like the first panel with Batman, the policeman, and monster is actually Bob Kane's penciling work! It looks a lot like the early non-ghosted stuff from the first few Detective Comics stories. And the monster looks different in the other (ghosted) panels.

4) The idea that an aluminium foil hat can block radio waves is partly true. Problem is that, to be effective, your entire body must be wrapped in foil to work. Otherwise, any exposed part can receive and absorb radio waves!

5) Alien robots have vacuum tubes? You'd think they'd have transistors or something a tad more advanced...

Britt - Believe it or don't, in the next panel, the robot broadcasting commands to the creature IS wrapped in aluminum foil to block the signal. Batman ALWAYS has his bases covered....

as for side kicks, super chicken would tell Fred, "You knew the job was dangerous when you took it."

"He will drink his Super Sauce and throw the bad guys for a loss..."

Super Chicken's theme probably should have been used for SuperPro!

Batman's last panel was "borrowed" from a Sherlock Holmes adventure, "The Cardboard Box", where the victims were also identified through "definite characteristics".

Prior to 9/11 your passport photo HAD to show one ear because some countries still utilized a "Bertillon Comparison" test (anthropometry) that uses visible body parts for comparison and even could be used in criminal prosecution.
Since the ear was a seldom-altered part (by plastic surgery) of the human anatomy, the Bertillion Comparison was often used in identifying people both alive and dead.
These days, fingerprints, dental records and DNA have largely-replaced it as a legally-accepted method.

Wasn't Storyville the red light district of New Orleans? Did Bats take Robin down there to "make him a man"?!?!!?!?!
Oh lordy, I need brain bleach!

"Great Scott... a noise... behind us!" is about the greatest, most unnecessary, self-defeating line I've ever read!