Because There's Nothing Suspicious About Having a Name Like "Madam Fatal" Wednesday!

Today, we salute the awesomeness of Madam Fatal: 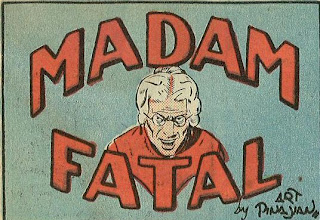 The saga of Madam (or "Madame" at times) Fatal ran for 22 issues of Crack Comics, at which point it was cancelled because believe it or not, the notion of a guy dressing as a girl and fighting crime didn't capture the attention of small children for long. 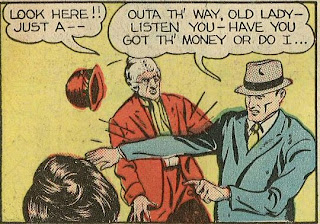 See what I mean? By comic book standards, those thugs got off light.

And since this was an origin story, we learn the reason Richard Stanton dressed up as an elderly woman for eight years before this story took place. Not surprisingly, we never got a Madam Fatal: The Lost Years mini-series (although I bet I could write a great one).

Begin with the expository dialogue!: 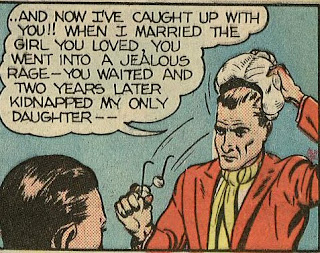 You think that's it? Nope. Richard has been tucking his junk for eight years, and you're going to hear the whole story behind it: 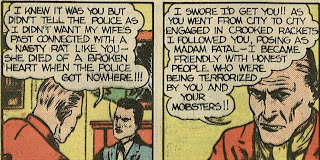 What was so goofball about all this was that by the time we're finished with the very first Madam Fatal appearance, the motivation for the character is gone. Madam Fatal found and killed the guy he was looking for, and was now down to "fighting crime and lawlessness" as a transvestite:

DC Comics acquired the rights to Madame Fatal when the obtained the rights to all of the Quality Comics characters, but as you might imagine, they didn't see a diamond in the rough here. As far as I know, Madam Fatal only popped up twice in a DC Comic. First, in the awesome The Golden Age mini in 1993: 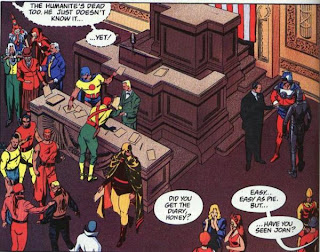 See? Top left. The Gambler and the Fiddler are trying to charm Madam Fatal, apparently unaware (or heck, as far as I know, maybe quite aware) that Madam Fatal is actually a dude. Then again, the giggles of the Psycho Pirate and the Harlequin make me think they are in for quite a rude surprise if they ever get to third base.

And the final indignity - - - dying off camera. Madam Fatal apparently had passed away by 1999's JSA #1:

While the Golden Age Red Tornado (the Ma Hunkel version) is the first time a woman fought crime dressed as a man, Madam Fatal was the first cross-dresser guy-to-girl, and so we give Madam Fatal props for groundbreaking, and for letting his Freak Flag fly!

See you tomorrow!
Posted by Adam Barnett at 12:19 AM

Who is that guy dressed as "Sarah", commenting on Madam Fatal's strength? 'Cause that sure as heck ain't no woman.

Actually, MOST of the Quality Comics characters are public domain...
http://en.wikipedia.org/wiki/Category:Quality_Comics_superheroes
(Note: Blackhawk which continued publication when it switched publishers, is NOT public domain, but Plastic Man's Quality Comics appearences are!
and
http://tvtropes.org/pmwiki/pmwiki.php/Main/PublicDomainCharacter
as are most of the Fawcett Comics characters, except for Captain Marvel and his entourage.

That's why, when DC revives them, they usually do NEW characters (Black Condor, The Ray, Spy Smasher, etc.) based on the name or revise the backstory considerably, to establish a licenseable trademark.
(NOTE: Roy Thomas tends to try to keep the original versions as intact as possible. His concern is the history of the character, not future licensing on luchboxes! Gotta admire him for that.)

Excellent resource, Britt! But the article indicates DC bought the Quality Characters while they were under copyright and then let the characters they weren't using fall back into the public domain.

So, is Madam Fatal still in the DC stable or not?

What the heck is up with that parrot?! Seriously, how much time did he spend teaching it to say that, for just such an occasion as this?

I think his "but honey, I'm a crimefighter" story is just what Richard told the Mrs. when she caught him dancing around in her unmentionables and then he had to keep the lie alive by actually bashing bad guys. That's my "lost years" storyline!

It would be interesting to see a full treatment of The Death of Madam Fatal. Perhaps the "touring cast of La Cage Aux Folles" was actually a super-secret League of Transvestite Superheroes? And his death will be avenged by his long-lost daughter, now a crime-fighter herself.

How do you think "Fatal" is pronounced? I'm hearing it as a Frenchified "fuh-TALL". More of a surprise when the bad guys figure out that the old lady with the odd name is FATAL!

He indoctrinated his parrot!!

"But the article indicates DC bought the Quality Characters while they were under copyright and then let the characters they weren't using fall back into the public domain."

When you consider that the trademarks had lapsed on most of the characters, including Plastic Man, whose name was taken by another publisher for a new villain for several issues and whose Quality series was reprinted by I.W. Comics before DC's 1966 revival, which made DC's version the SON of the Quality Comics character, and Quicksilver (whom DC now calls "Max Mercury"), what DC actually purchased is and was somewhat nebulous!
You'll also note the plethora of "unauthorized" reprints from AC, Verotik and others of various Quality and Fawcett characters except for the Marvel Family and Blackhawk...

I'm with Echo. I would like to see a comic series regarding Madam Fatal's death, and what happened to her daughter... all that jazz.

Unfortunately, I don't think people are open-minded today enough to revive an transitive crime-fighting hero... but his daughter could certainly take on the title of Madam Fatal.

I just know she could be equally as kick-ass as her father was, if done right. however the pessimistic in me fears that she would be just reduced to being one of those super-heroines that became a:

1)Rape victim. (you have no idea how many times this happens... or maybe you do. and sometimes this ruins an super-heroine's story. Because then all the male and some female readers ever will see her is as that poor rape victim, not as a strong woman who were able to overcome something like that and hunt down the bastard. and unfortunately this also feeds into the stereotype of a woman being broken, tarnished or ruined forever when there actually have been strong survivors out there who wasn't ruined in any way at all, expect maybe having been very afraid and traumatized at first after it happened.) There has also been a growing cliche of the sexually molested child-turned-heroine/vigilante/villainess.

Unfounately, as well-meaning as some male writers are... they have no idea how to write a believable woman character, and that leads to character derailment and shitty treatment of her.

I hear you, Aurora! Women in comics just aren't handled well as a general rule. They are either perpetual victims or laughably butch ball-busters. I think a Madam Fatal title could be excellent, but I don't think the world is ready for it, especially since DC itself has treated the character as a target for gender-bending jokes.

Gail Simone, who is one of the best writers out there today (female or male), would be my choice as a writer for it. It'll never happen, but it would be beyond cool.