Costume Hall of Shame - The Sandman 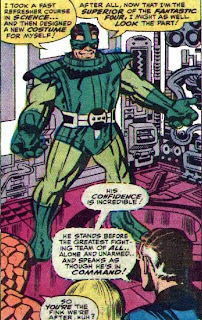 Ok, it's not like the original green-stripey shirt was the talk of the town in Paris, but it is positively chic compared to this thing. Since the Sandman was walking around without a mask for the first several years, it seems kind of silly that he would start worrying about covering his face now. 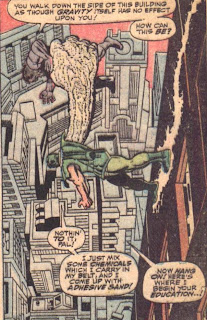 The "mixing chemicals with my sand to do funky things" angle was supposed to make him more super-villainish, but it failed miserably. The Sandman is a very tough customer in the Marvel Universe, and the attempt to make him a second-string Metamorpho was distracting and silly. Besides, as seen in the pic above, when he used those powers, he would leave little pieces of himself all over the place. Was he planning on coming back later and recouping the sand he used? I just didn't get it.
Posted by Adam Barnett at 9:22 AM