Reefer and Satan, Together Again

Since we looked at the Shield story on Friday, you knew we just had to check out the Comet story from Pep Comics #2.

You know how when you were a kid, you used to think you could write comics?  You could have written this one.  Guaran-dang-teed. 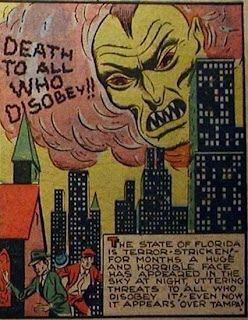 Ooooooo!  Scary!  But the Comet will not abide it!  HE SHALL NOT! 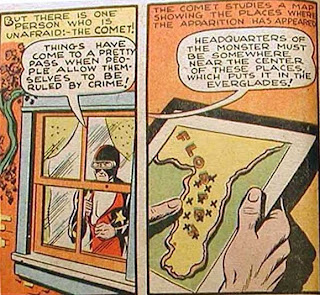 I think if the monster has a "headquarters," we're kind of giving something away here.  Anyway... 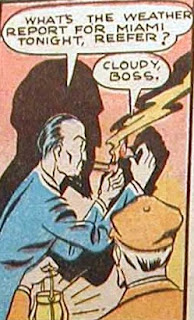 The man's name is "Reefer."  Okay, that was awesome. 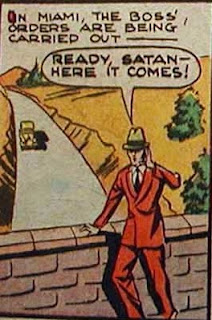 THE TRUCK APPROACHES, MY DARK LORD!

Now I realize I don't always read things that carefully, but there is nary an origin story for Satan, so I can only assume he's the Biblical version.

I wonder if it's any coincidence that "Reefer" works for "Satan."  The Devil's Parsley shall not pass mine lips, it shan't!

Anyway, the Comet gets himself caught, because we've got to fill up a page, and he breaks his visor: 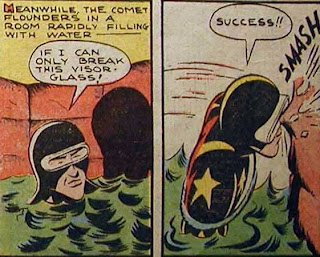 Okay, so you recognize that the visor is the only thing that keeps those disintegrating rays from dissolving anything he looks at, right?

Except when it doesn't: 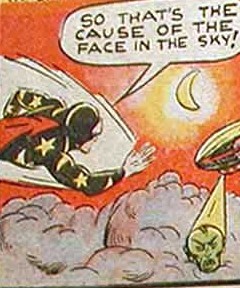 Now, we're either glossing over the fact that his eyes should have taken out the blimp on sight (not to mention his right hand there), or he's flying with his eyes closed and is just a very good guesser.  Frankly, I think it would have been very entertaining if he'd had to fly with his eyes closed, running into things like birds into windows:

I wonder if they have any radio towers around here... ZZZZAP!  THUD!

Did you make those sound effects in your head?  Because you were supposed to.

Anyway, now that it's convenient to the telling of the story, the beams do their "visor-lifty" thing: 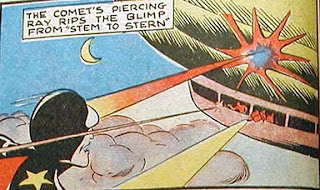 And, without any real explanation of who was responsible for it, the story just... well, it just comes to an end: 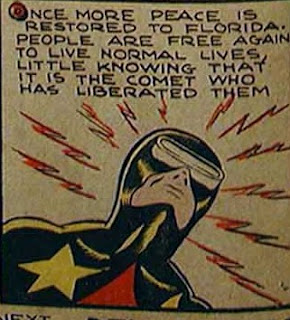 I guess that settles that.

It makes sense that The Comet would be immune to his own vision power, so I will give it a pass if his hand doesn't dissolve when he looks at it. His glove might though. I mean as far as I know there was no explanation as to why or how he got his costume that would rationalize that it would be any stronger or more resilient than any normal cloth. That sort of thing was explained with Superman (it was cloth from his home world and therefore super tough) and the Fantastic Four (unstable molecules that took on the properties of the superpowers that were used by the person wearing it)
As far as the blimp not dissolving the second he looks at it, his vision must have a "range" and perhaps even a "focal point" I guess. Also it probably would only work on things that had sufficient mass. Again that makes sense or else afew things would happen.
Such as everything in his field of vision would immediately vaporize. While his visor was down that would mean that in the area between his eyes and the visor the air would vanish thus creating a vacuum Meaning that one of two things would happen.
The pressure inside his body would push his eyes right out of their sockets
or
His eyes would just pop like overfilled balloons.
Also all the air between him and whomever or whatever he was zapping would dissolve which would cause a thunder sort of effect when he cut off the beam with his visor and the air collapsed back into the area that was made a vacuum from the vision beam.
There must also be a "range" because we can also see the moon in the picture with the blimp. Luna is about a quarter of a million miles away from Earth. He would be able to see all of it, so boom no more moon. That would REALLY mess with the Earth, probably eventually ending all life on Earth.

Another thing to think about is that I guess if he can't see something it doesn't vaporize, thus the clouds blocking his view of the ground means that the things on the ground don't "go up in smoke" as it were. Of course that is if the things on the ground were within his range and at the correct focal point.
This brings to mind a question. Would a "bad guy" be able to thwart the Comets vision power with a smoke bomb?

P.S. Can you tell that I think about this stuff way to much?

The Everglades are the one place in Florida that the apparition has not appeared - hardly the center of it all. I'd lay odds on Orlando.

Tell the Comet he's been duped! He should look for a castle in the Orlando area. Castles = bad guys (see Doom, Doctor).

Upon researching this character, I read something that said that he may be being able to fly because his vision is vaporizing the air in front of him and the pressure differential is thereby pushing him forward. I seriously doubt this hypothesis though as it is shown that he has his visor down whilst flying and also for the sheer fact of the stuff I said before about his vision probably not effecting things of insufficient mass.

Marvel's Cyclops never had the balls to break his own visor!