Pollyanna with Pants On Tuesday!

Hey! Here's a contribution from our pal Robert Gillis from Superboy #80. As I understand it, Supergirl went back in time and met Superboy and then realized that, like all females, she was stupid and had poor judgment:

Now, I don't know if Supergirl is exaggerating, but if the adult Kal-El has her convinced that she is capable of committing an infraction that would warrant him banishing her from the entire planet.... well, this girl needs domestic violence counselling. And Superman is a jerk. Did I mention that today? 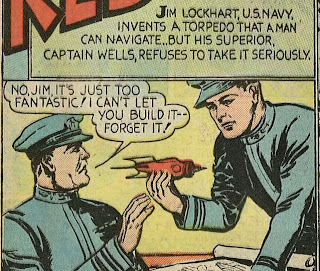 From Crack Comics #43, we have the origin of the Red Torpedo. Notice that the General is holding an exact model of the future Red Torpedo's sub in his very hands.

By the end of the story, this exact sub has been built and assisted the Navy in ways described to the General by Jim Lockhart, who would become the Red Torpedo:

The fact that the General just can't quite put it together that a mysterious hero piloting a submarine that his former subordinate pitched to him is the Red Torpedo is.... well, I facepalmed. It happens when you read bad comics on purpose.

Here's a little slang that we don't use anymore, but we should: 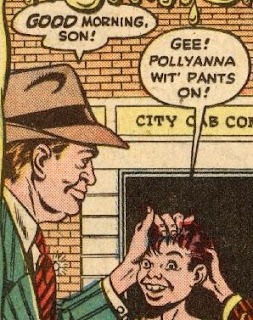 I have no idea what it means, but if a kid said it, you know it was cool. It probably still is.

See you tomorrow!
Posted by Adam Barnett at 12:41 AM

that kid in the last panel has a freakishly small head... notice how that guy's hand almost pretty much covers the whole top half of his head.
unless, that man's a giant?
by the way I decided to use my livejounral account for commenting from now on. :P

"It's just too fantastic! I can't let you build it..."
(It's cheap, easy to build, and can probably win the war at sea for us! Why would we want one, or a fleet of them?)

Yet, Jim Lockhart: USN, builds it in his spare time in his own backyard???
Did he "misappropriate" government equipment and supplies to do so? ;-)

(And, actually, Jim is holding the model, not Captain Wells.)

Are you sure that Pollyanna with pants on is not simply something that child thought up? He looks as if he would think of something like that.

His head really is freakishly small...

Hi Adam,
Just a totally unrelated post to say how much I'm enjoying your blog, which I have just discovered - lotsa laffs, and that of course includes your own witty observations!

I also wanted to comment here* about the use of unnecessary word-balloons on comics covers (Weds, Jan 27 - re: World's Finest), and I totally agree with you. This is what robbed Marvel covers of so much of their mystique in the 70s (well, plus the fact that Gil Kane drew what seemed to be the bulk of them, simply reproducing the primary fight scenes, which also led to what I think was a horribly stale house style).

Welcome, Lorenzo! Yes, I enjoy covers a lot more when they don't use artificially expository dialog. It's a personal taste thing, but I think the lack of text is much more sophisticated.

Thanks for joining our comic book fun house!